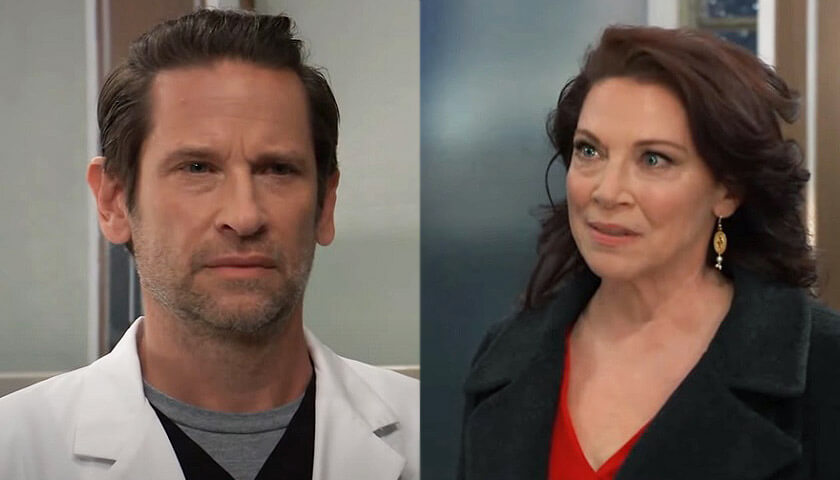 The General Hospital (GH) scoop for the week of February 14 hints Austin Holt (Roger Howarth) will team up with Liesl Obrecht (Kathleen Gati) .

GH spoilers tease Esme’s Valentine’s surprise will not go over well. Spencer won’t be blown away by her presence at Spring Ridge at all. In fact, all he’ll talk about is how his friends are doing and he’ll ask her specifically about Trina Robinson (Sydney Mikayla). Then Esme will be furious when she finds out Kevin Collins (Jon Linstrom) limited her access to his twin brother.

GH Weekly Scoop – Carly Has A Big Decision Ahead Of Her

Over with Felix, who will run into Carly Corinthos (Laura Wright) shortly after he’s back in town. Felix will be stunned when he hears about the problems in Carly’s marriage, but will he offer to help? Regardless, Carly will have a big decision ahead of her – will she file for divorce?

Speaking of Sonny, he’ll continue drinking his sorrows away at Charlie’s Pub on Valentine’s Day. And, big surprise, Nina will show up. “We both know I have a vested interest,” she tells him in the GH sneak peek. And it looks like Nina will also have a busy week as she’ll have a question for Britt Westbourne (Kelly Thiebaud) and cross paths with Willow Tait (Katelynn MacMullen).

Other GH spoilers tease TJ Ashford (Tajh Bellow) will tell Molly Lansing (Haley Pullos) his mom may be back in Port Charles sooner than she planned. Plus, Terry Randolph (Cassandra James) will mistake Chet Driscoll (Chris Van Etten) for her blind date. But she won’t mind.

Finally, Austin and Liesl will be desperate to locate Maxie Jones (Kirsten Storms), who absconded with Peter August (Wes Ramsay). It’ll be a tough week for Maxie as well. She on the run with a man she despises. And spoilers show she’ll wake from a terrible dream. But could it be any worse than the living nightmare she’s currently found herself in?

Rumor has it, Austin will threaten Victor Cassadine (Charles Shaughnessy) with a syringe. Then he’ll order him to spill everything he knows. But before he gets a chance to learn anything, Liesl will stop him. This will create the illusion that she’s on Victor’s side. Plus, she’ll confide in Austin later that she planted a bug on Victor. But will they learn anything about Maxie’s whereabouts from the listening device?