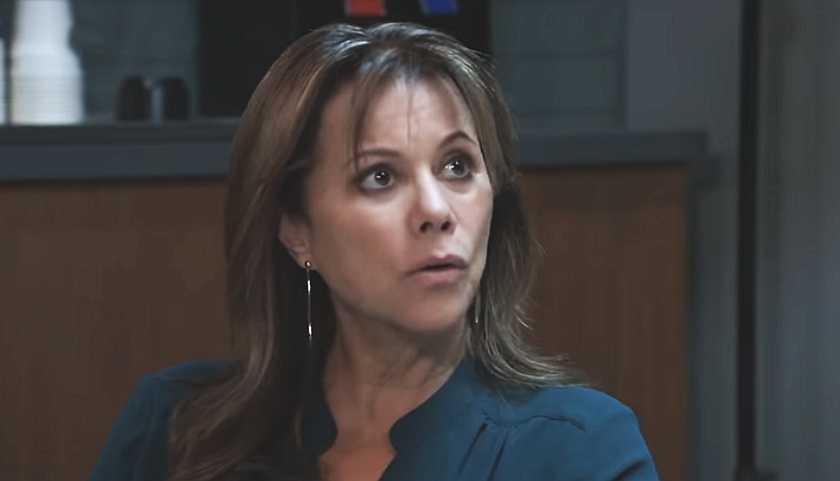 Also coming up this week, Carly Corinthos (Laura Wright) will worry about her husband and Liesl Obrecht (Kathleen Gati) will return to Port Charles. Plus, Hamilton Finn (Michael Easton) will be wracked with guilt.

Spoilers tease Carly will be frantic with worry about Sonny Corinthos (Maurice Benard). He and Julian Jerome (William deVry) both fell off a bridge into icy waters at the same time. Julian is dead and Sonny’s missing. So what happened to her husband?

Speaking of Sonny, he will receive a spiritual visitor this week. His dad Mike Corbin (Max Gail) will appear to him. The good news is, this means Sonny is alive! The bad news is, Sonny may have amnesia. Wherever he is however, will remain a mystery for a while longer.

Carly is holding it together for her family, West Coast. What are the chances she and Jason can find Sonny alive?#GH is dramatic, new and STARTS NOW on ABC! @lldubs @1SteveBurton pic.twitter.com/NsaIYRpbnh

Over with Liesl, who will return just in time to support her buddy Franco Baldwin (Roger Howarth), who has a brain tumor. However, viewers know Liesl will have an interior motive in doing so. That would be all of Peter August’s (Wes Ramsay) wrongdoings. Can she somehow pry them from Franco’s troubled mind?

Meanwhile, Finn will feel guilty when Jackie Templeton (Kim Delaney) returns. He’s remorseful every time he sees her. After all, the pair slept together the night before Jackie married his father. Will he tell Gregory Chase (Gregory Harrison) the truth this week?

General Hospital Scoop – Will Alexis Davis Drag Ned Quartermaine Down With Her?

Finally, Alexis will continue to hit the bottle as a new year begins. This, despite the intervention of her friends and family. Rumor has it, when she finds out Julian has died it’ll make her mindset even worse.

Alexis will continue to spiral out of control. And unfortunately, it seems like no one can get through to her. But as she continues to hit the skids, will she end up dragging Ned Quartermaine (Wally Kurth) down with her?