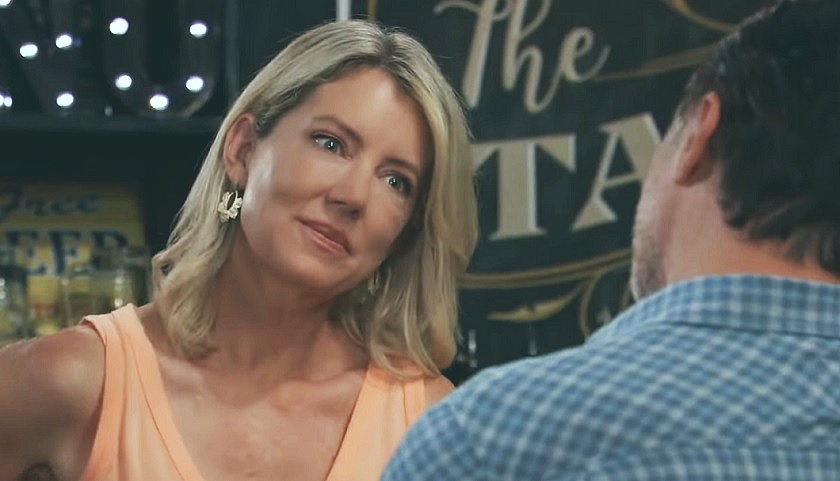 The General Hospital (GH) scoop for the week of August 9 hints Nina Reeves (Cynthia Watros) and Sonny Corinthos (Maurice Benard) will get closer.

GH spoilers tease Nikolas will accuse Spencer Cassadine (Nicholas Chavez) of corresponding with Ryan Chamberlain (Jon Lindstrom). But his son will deny it. Then he’ll tell Nikolas he sent the letter from Ryan back to the villain, unopened. Of course, Nikolas has no idea what Spencer’s really been up to. He will feel bad and apologize.

Over with Portia, who will be upset that she’s ruined her relationship with her daughter. But she’ll be surprised when she finds a sympathetic shoulder in none other than Jordan. The cop has been through her fair share of turmoil. She’ll tell her rival Trina Robinson (Sydney Mikayla) will come around.

Other GH spoilers tease Shawn Butler (Sean Blakemore) is not going to stop until he finds out who shot Hayden Barnes (Rebecca Budig). This week, he’ll locate her mom Naomi Dreyfus (Gigi Bermingham). But will he show up at her door? And Sam McCall (Kelly Monaco) will seek assistance from Dante Falconeri (Dominic Zamprogna).

Meanwhile, Carly and Jason will decide to present a united front. So, they’ll consider calling a Five Families meeting. But will they go ahead with it? Then later in the week, Carly will worry that Jason is under too much stress. However, things are about to get even more stressful, when Jasper Jacks (Ingo Rademacher) confronts him.

General Hospital Scoop – Carly Corinthos Has Been Left In The Dark

Speaking of Carly, she still has no idea her husband is alive and well and living in Nixon Falls. And every day, Sonny’s getting closer to her nemesis. As her wedding day with Jason approaches, will she finally find out the truth?

Finally, despite Nina’s guilt about knowing who Mike really is, she’ll make a major decision. She wants a serious relationship with him. Nina believes she’s found the right man for her and wants to make it work. They’re happy and both will look forward to their future together. But how long can it last before it blows up in Nina’s face?