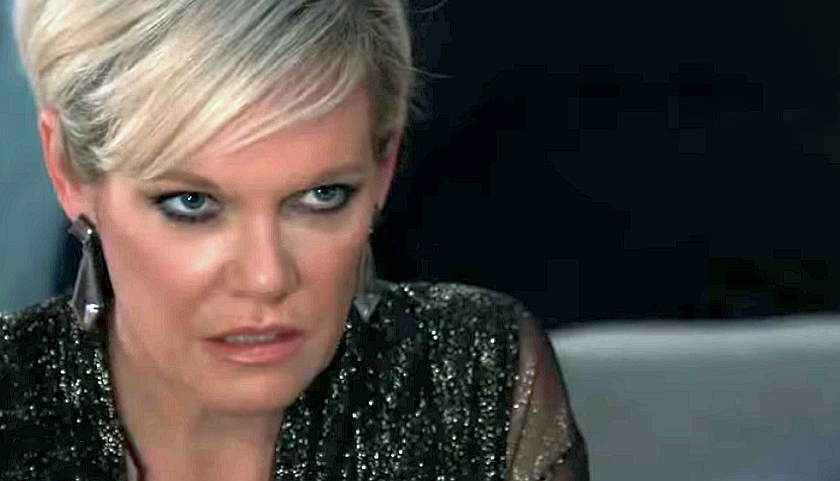 The General Hospital (GH) scoop for the week of April 5 hints Ava Jerome (Maura West) will receive another gruesome gift.

Also coming up this week, Peter August (Wes Ramsay) will threaten Gladys Corbin (Bonnie Burroughs). And Carly Corinthos (Laura Wright) will put the pressure on. Plus, Sasha Gilmore (Sofia Mattsson) will decide to move on and Maxie Jones (Kristen Storms) moves forward with her plan.

Meanwhile, Valentin won’t be the only person Gladys encounters this week. Peter will also seek her out. And he’ll make some serious threats. Viewers know her statement to the GCPD was a sham. Gladys implicated Jason in Franco Baldwin’s (Roger Howarth) murder. However, did she actually witness Peter committing the deed?

Over with Sasha, who will walk in on an intimate moment. Michael Corinthos (Chad Duell) will be about to kiss his ex-wife Willow Tait (Katelyn MacMullen). But will Sasha decide it’s time to move on? Perhaps with Brando Corbin (Johnny Wactor)?

Finally, Ava will get another package with something morbid inside. Back in February, she received a cockroach in a glass case. “Secrets and cockroaches. Those are the only two things that always survive, except for us,” the note attached to it read. It was classic Ryan Chamberlain (Jon Lindstorm). But how could it be? He’s locked up at Pentonville and he’s also paralyzed.

Whatever is inside the next package, her husband won’t take it kindly. Rumor has it, Nikolas Cassadine (Marcus Colomo) will head to Pentonville to confront Ryan. But is the serial killer sending Ava the gruesome gifts? Or is it someone else?