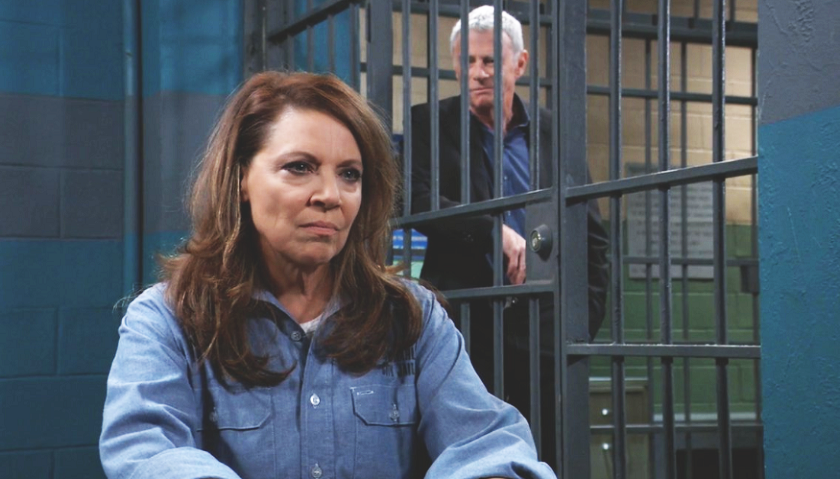 The General Hospital (GH) scoop for the week of April 13 hints Liesl Obrecht (Kathleen Gati) will be transferred to a prison in The Hague.

Also coming up this week, Harrison Chase (Josh Swickard) and Sasha Gilmore (Sofia Mattsson) take drastic action to protect Wiley (Erik And Theo Olson), Mike Corbin’s (Max Gail) death is drawing near and JaSam will sneak in some time together.

Viewers should note that GH will air original episodes from Monday to Thursday moving forward. A flashback episode will air each Friday, due to halts in filming caused by the COVID-19 pandemic.

Let’s start with Obrecht, who will get some terrible news from District Attorney Robert Scorpio (Tristan Rogers). He’ll tell her she’s going to be sent to The Hague. She’ll be furious, but he will advise her to keep quiet while he tries to prove that Peter August (Wes Ramsey) is the guilty party.

The Hague is well known around the world as the International City of Peace and Justice. The city also hosts international courts, some focusing on international crimes. Spoilers tease a tearful Liesl will say her goodbyes to Maxie Jones (Kirsten Storms), hoping she’ll return to Port Charles soon, once Robert has cleared her name.

Over with Sonny Corinthos (Maurice Benard), who still refuses to believe his father will succumb to Alzheimer’s. Rumor has it, an emergency will occur and Mike’s battle will be over soon. And Sonny will need the support of his family to get through this heartbreaking chapter in his life.

Meanwhile, Chase and Sasha begin to believe that Willow Tait (Katelyn MacMullen) marrying Michael Corinthos (Chad Duell) is the only way to protect Wiley from Nelle Benson (Chloe Lanier). This week, they’ll set out to convince their significant others to go ahead with the plan.

And JaSam fans take heart, as Jason Morgan (Steve Burton) and Sam McCall (Kelly Monaco) will enjoy some clandestine and romantic moments together this week. These two aren’t going to let a parole stipulation keep them apart forever, as long as they don’t get caught.