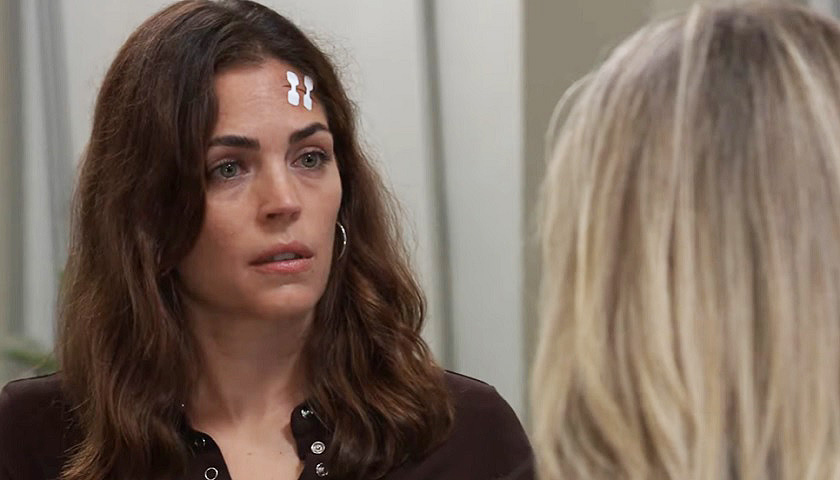 GH spoilers tease Chase may regret showing up at the Quartermaine mansion for Thanksgiving. He’ll be greeted by a surly Ned Quartermaine (Wally Kurth). “Maybe this was a bad idea,” he says to Brooke Lynn Quartermaine (Amanda Setton) in the GH weekly sneak peek. And Valentin will also arrive, and inform her he’s revoked their share agreement. “Out with the old, in with the new, right?” he’ll say to BLQ.

Over with Sam McCall (Kelly Monaco), who will be thrilled when Drew shows up at her door. But her elation will turn to grief when he tells she and Dante Falconeri (Dominic Zamprogna) there’s something they both need to know. Then he’ll lay it all out and tell Sam and Dante about the explosion and Jason being lost in the rubble.

Later in the week, Drew will also reunite with Sonny, who will have a huge grin on his face as he spots his old friend. “Long time no see,” he’ll say to Drew. But after an emotional reunion, Drew will tell Sonny the shocking news of Jason’s demise.

Other GH spoilers tease TJ Ashford (Tajh Bellow) will be stunned to find out Curtis Ashford’s (Donnell Turner) father is alive. Plus, Nina Reeves (Cynthia Watros) will confide to Phyllis Caulfield) that she misses Nixon Falls.

Finally, Carly will run into Britt at the hospital. She’ll find out that Drew, Britt and Liesl Obrecht (Kathleen Gati) made it off Cassadine Island alive. But then Carly will get news that will knock her to her knees.

“Everyone’s safe, right Britt?” she’ll ask her rival. And Britt will have the unfortunate task of telling Carly that Jason is believed to be dead. But how is she going to react? Will Carly blame Britt for Jason being on Cassadine Island in the first place?