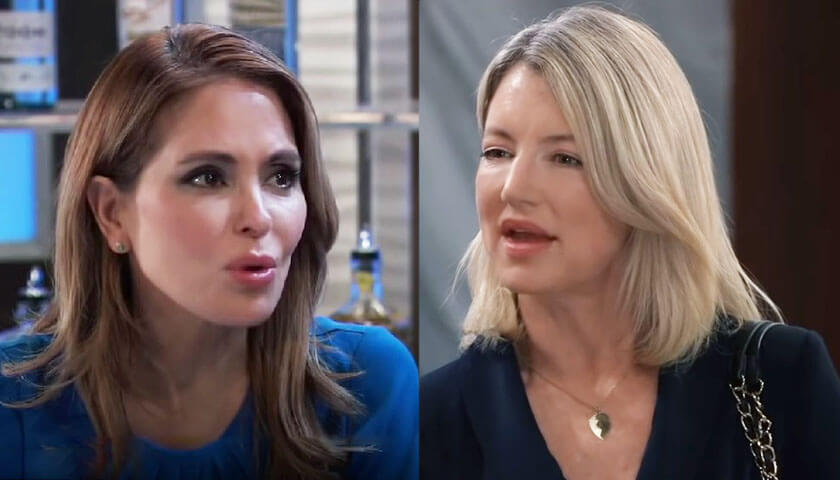 Also coming up this week, the show will celebrate its 15,000th episode. Plus, Harrison Chase (Josh Swickard) will worry he’s going to get kicked off the police force. And the ELQ shareholders meeting will commence.

GH spoilers tease a standalone episode will focus on Laura Collins (Genie Francis). She’ll face a major threat to her mayoral status in Port Charles. “I’ve narrowed the suspects down to one,” she tells Martin Grey (Michael E. Knight) in the GH sneak peak. But will that one suspect be Cyrus Renault (Jeff Kober)?

GH Weekly Scoop – Leo Overhears What Michael Is Up To

Over with Chase, who will face the consequences of his actions. His standing at the PCPD is already shaky at best. But punching Linc Brown (Dan Buran) didn’t exactly do him any favors. It looks like his suspension will become permanent. And he’ll confide his bad news to Brook Lynn Quartermaine (Amanda Setton).

Meanwhile, as the ELQ shareholders meeting gets underway, Valentin Cassadine (James Patrick Stuart) will argue with Michael and Drew Cain (Cameron Mathison). But will Valentine get his way? Or  will Drew and Michael come out on top?

Other GH spoilers indicate Trina Robinson (Tabyana Ali) will have a run-in with Esme Prince (Avery Kristen Pohl). But she’ll also be hopeful about her case. Plus, Leo Falconeri (Easton Rocket Sweda) will overhear Michael Corinthos’ (Robert Adamson) plan to destroy Sonny Corinthos (Maurice Benard). But is he going to tell anyone?

Finally, Nina will face yet another foe. This time it’ll be Olivia, who will blast her for what she’s done to Carly Corinthos (Laura Wright). She’ll tell Nina she destroyed Carly’s family and a lot of people will never forgive her for that. But Nina will adamantly defend her relationship with Sonny. And this will anger Olivia even further.

Of course, a nasty argument will ensue. When Sasha Gilmore (Sofia Mattsson) arrives and backs Nina up, she’ll go on the offensive. However, Willow Tait (Katelyn MacMullen) will approach and spoilers tease she’ll collapse once again. Willow’s fainting spell will effectively put an end to the dustup, as the women rush to her side. But is something wrong with Willow, or could she be pregnant?