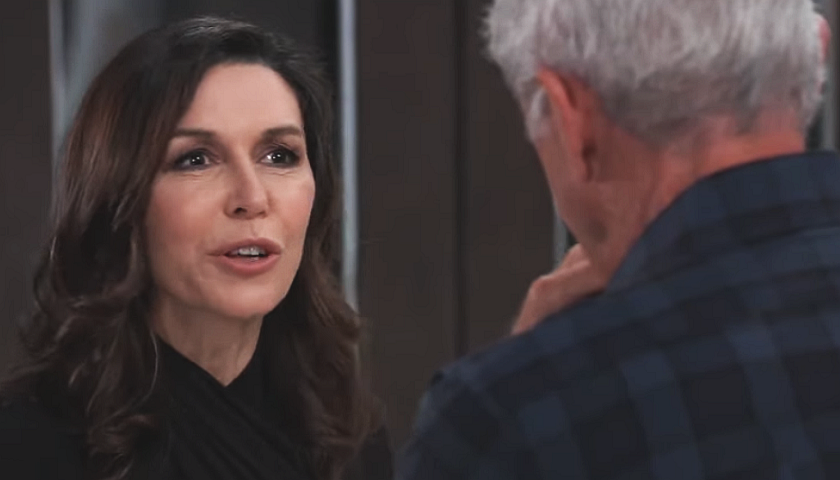 Spoilers tease she will regret her unshakeable defense of Peter August (Wes Ramsay). Fans know she was adamant when she told Robert that Peter had changed. But she now knows that’s not the case.

Anna’s blinders have finally come off where Peter is concerned, and she’s seeing him in a whole new light. Robert saw The Invader publisher for who he really was right from the start and Anna will apologize to her ex for doubting him.

The District Attorney knew that Peter murdered Drew Cain (Billy Miller) but Anna was in denial. She believed Liesl Obrecht (Kathleen Gati) was the culprit all along. However, now she’s finally come around to his way of thinking.

Back in September, she asked him if he just wanted to continue dredging up misery for everyone around him “in this endless quest to be right,” when it came to Peter. “I see it that you have two choices,” Robert responded. “Keep on avoiding the truth, or step up and face it.”

He warned her time and again about her son, but she just wouldn’t hear it. But will Robert say “I told you so?” when she tells him she’s sorry? Or will he feel nothing but relief when he realizes Anna’s eyes have finally been opened?

Rumor has it, Anna will also begin to feel terrible for Maxie Jones (Kirsten Storms), who is having Peter’s baby and is set to marry him. However, will she try to stop Crimson Magazine’s VP from marrying the villain?

Early next week, Anna will also team up with Valentin Cassadine (James Patrick Stuart) to come up with a plan to stop the wedding. Will she and Valentin ask Robert to help them?