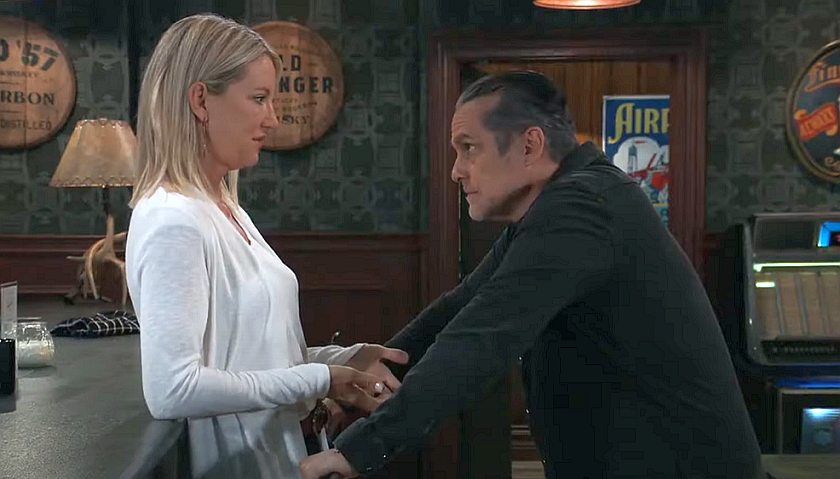 The General Hospital (GH) scoop hints Nina Reeves (Cynthia Watros) has developed feelings for “Mike” and he for her. But will they sleep together?

On Tuesday, Nina received a call from Michael Corinthos (Chad Duell), telling her she could see Wiley. But of course to do that, she’ll need to return to Port Charles.

Mike, aka an amnesiac Sonny Corinthos (Maurice Benard), has already told Nina he kissed her because he cares for her. As for Nina, she’s also seen a different side of Sonny in his new persona. As a result, she believes he’s a much kinder, peaceful version of the mobster he used to be.

“One day I woke up and I realized, you’re the first person that pops into my head in the morning,” Nina told Mike. “And you’re the last person I think about before I go to sleep. Good or bad, the happiness and peace that I have found here, I have never had in my life.”

General Hospital Weekly Scoop May 24 to 28: Mike Has A Warning For Nina – Valentin Issues A Threat – Maxie Is Ready #GH #Generalhospital https://t.co/K2EWwbCpKB

Phyllis Caulfield (Joyce Guy) also seems to sees their coupling as inevitable, as do many viewers. In fact, when Nina dished to Phyllis that Mike kissed her, her friend replied that “everyone saw that coming.”

However, when Mike opened up to Nina recently, she told him they could never be together. “It would only mean heartache for you and believe me, for everyone else.” But Mike disagreed with her.

“Maybe we wound up in this town for a reason – maybe it’s a chance for happiness,” Mike said. Obviously, Carly Corinthos (Laura Wright), who is still mourning Sonny, would disagree with that statement.

Then again, it seems as though Nina is going to leave Nixon Falls and head to Port Charles to see her grandson. However, will she return? “Does this have to be goodbye?” she’ll say to Mike on Wednesday’s GH. But will Nina come back and will she and Mike make love? Vote in our poll below!

Will Nina And Mike Sleep Together?