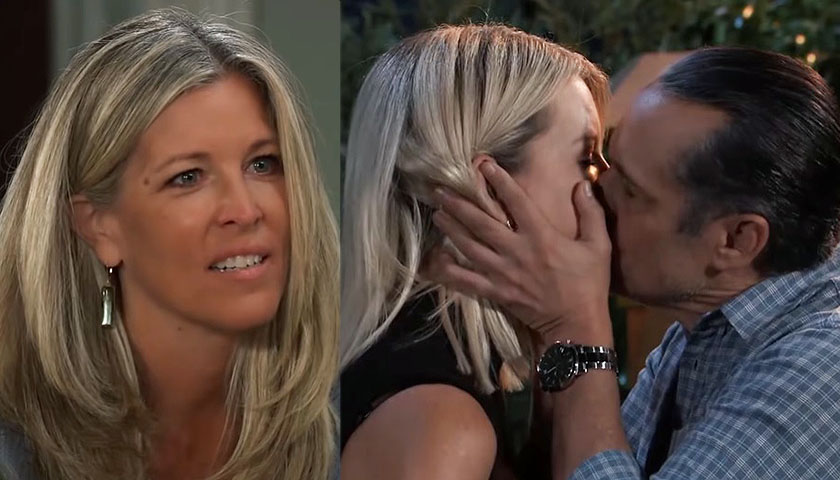 The General Hospital (GH) scoop hints Carly Corinthos (Laura Wright) will soon find out her husband and her nemesis were more than just friends in Nixon Falls.

GH spoilers tease that next week, Carly will fret when she sees something questionable. But is she going to witness a close moment between Sonny Corinthos (Maurice Benard) and Nina Reeves (Cynthia Watros)?

Plus, during the week of December 6, Carly will corner Nina and demand to know what’s going on. And rumor has it, Willow Tait (Katelyn MacMullen) may also discover Sonny and Nina’s big secret.

GH Poll – Nina Reeves Kept The Information To Herself

As viewers know, it wasn’t long ago that Sonny’s friends and family thought he was dead, but of course he wasn’t. Instead, he was living in Nixon Falls, with amnesia. All he could remember was the name Mike (his late father’s name), so he took it for his own.

Then along came Nina, who recognized Sonny the moment he walked into the Tan-O. But instead of immediately telling Carly her husband was alive, she kept it to herself. Not only that, she developed a friendship with him.

Once she got to know “Mike” she realized she was falling for him and even envisioned sharing a life with him. Although the pair never slept together, they shared a lot of kisses and even proclaimed their love for one another. And despite the fact that Sonny’s returned to Carly, Nina’s still in love with him.

General Hospital Scoop – Led To Believe They Were Just Friends

So far, Carly and everyone else in Port Charles have been led to believe that Nina and Sonny were just friends during their time in Nixon Falls. But if the truth comes out, and we know it will, all hell’s going to break loose.

So, GH fans, it looks like Nina and Sonny’s secret will come to light soon enough. But how will Carly actually find out Sonny and Nina fell in love in Nixon Falls? Vote in our poll below!

How Will Carly Find Out About Nina And Sonny?