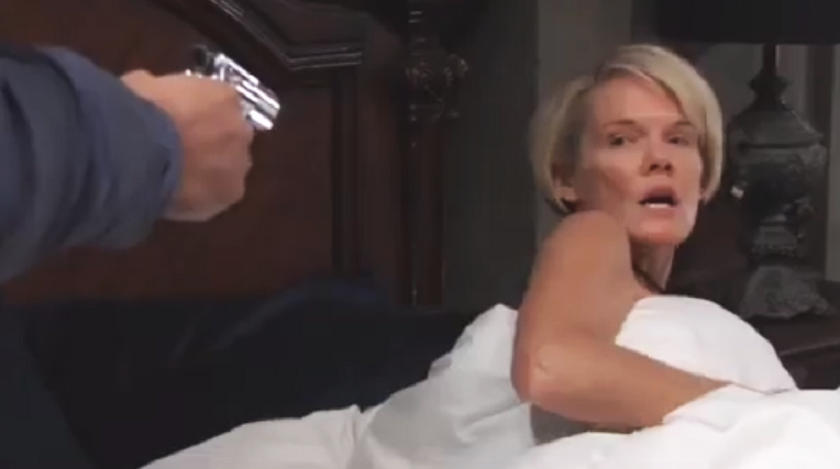 General Hospital Spoilers for Wednesday, January 8 tease that a new bride will be caught off guard and two stubborn Port Charles stalwarts will have a standoff.

It doesn’t look like a very romantic wedding night for Ava Jerome (Maura West). She will roll over in bed, only to see a gun in her face, held by none other than her new husband Nikolas Cassadine (Marcus Coloma).

It seems she will be looking for something and Nik will want to know what it is. Will this couple’s honeymoon be over before it’s begun?

Lulu Spencer (Emme Rylan) will be on the warpath on Wednesday. She will insist that Valentin Cassadine (James Patrick Stuart) must stay away from Charlotte Cassadine (Scarlett Fernadez) forever.

Her head is still spinning from the events of the past hours and she does not want her daughter to go through any more drama that involves Valentin.

Laura Collins (Genie Francis) and Nina Reeves (Cynthia Watros) will try to talk some sense into Lulu. After all, Charlotte will want to see her father at some point.  But will Lulu calm down?

Meanwhile, Valentin will demand that Robert Scorpio (Tristan Rogers) let him go. He’ll tell Robert he has nothing to hold him at the station and he better release him – now! Will Robert give in to Valentin’s demand?

Someone else who will be making demands on Robert is Jason Morgan (Steve Burton). He doesn’t think it’s fair that the only way for Sam McCall (Kelly Monaco) to stay out of prison is if she stays away from him. So will Robert help Jason out? And could viewers see a JaSam reunion in the near future?

At any rate, it looks like fans will be in store for another exciting episode. Keep reading The Soap Scoop for more General Hospital spoilers and news.