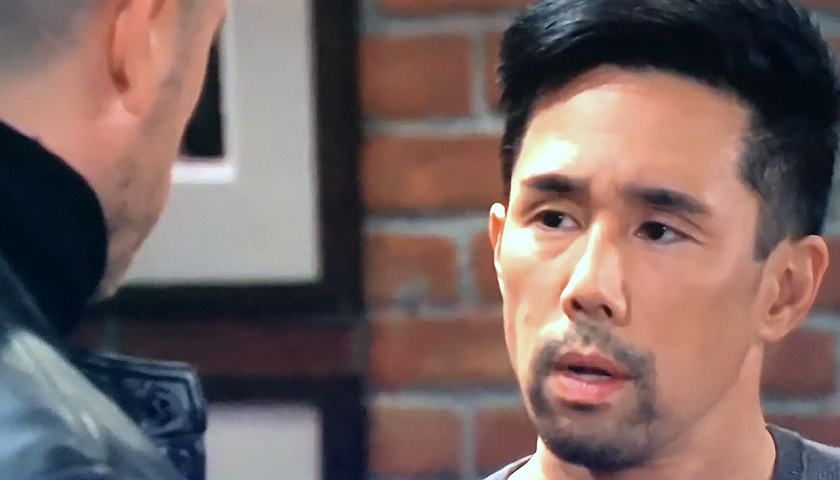 General Hospital (GH) spoilers for Thursday, January 16 tease that Julian Jerome (William deVry) will have a warning for Brad Cooper (Parry Shen). Also, word about Nelle Benson’s (Chloe Lanier) marital status will spread like a game of telephone throughout Port Charles. And Lulu Spencer (Emme Rylan) will have it out with Nikolas Cassadine (Marcus Colomo).

Let’s start with Julian, who will pay Brad a visit on Thursday. He will tell him that Sonny Corinthos (Maurice Benard) is inching ever closer to the truth about baby Wiley.

One of Sonny’s henchmen overheard Brad and Julian talking. And although he didn’t hear many details, Julian will tell Brad that Sonny is suspicious about their conversations.

General Hospital Spoilers – Lulu Spencer Has It Our With Nikolas Cassadine

“And if you’re not more careful,” Julian says to Brad in the GH sneak peek. “Sonny’s gonna figure out why.”

Over with Lulu, who is still furious with her brother for hiding the fact that he was alive for years, when they all thought he had died. Contrite, Nikolas will try to apologize to her, but she won’t want to hear it.

“Do not tell me that you are sorry,” she say to Nik. Will Lulu ever be able to find a way to forgive her brother?

Meanwhile, a stunned Alexis Davis (Nancy Grahn) will hear the news about Nelle from her daughter Sam McCall (Kelly Monaco). And of course word will also reach the Quartermaine family. Nelle will appear on their doorstep. She will announce to both Ned Quartermaine (Wally Kurth) and Olivia Quartermaine (Lisa LoCicero) that, as Shiloh Archer’s (Coby Ryan McLaughlin) widow, his ELQ shares belong to her. But Olivia won’t put up with Nelle for long.

“We’re going to make your life a living hell,” she will tell her. Spoilers tease Tracy Quartermaine will blame the whole situation on Michael Corinthos (Chad Duell), saying that if he hadn’t gotten involved with Nelle, none of this would have happened in the first place.

At any rate, it looks like fans will be in store for another exciting episode. Keep reading The Soap Scoop for more General Hospital spoilers and news. And make sure you click here to join our free Facebook Group.