General Hospital’s (GH) Luke Spencer (Anthony Geary) and Laura Webber (Genie Francis) were the most popular super-couple on any soap opera in the 1980s.

Their GH wedding aired on ABC on November 17, 1981 and I couldn’t help but tune in for it. The wedding was the first time I had watched GH, and I was immediately smitten with the soap.

But I wasn’t the only one. More than 30 million viewers tuned in to watch the pair tie the knot – it was the highest-rated soap opera event in North American history. The wedding was so highly anticipated that actress Elizabeth Taylor, who was a GH fan, appeared on the episode as Helena Cassadine.

Laura was walked down the aisle by her stepdad Rick Webber (Chris Robinson), as Helena watched from the back of the venue. Luke couldn’t keep his eyes off his fiancé as he stood with his best man Robert Scorpio (Tristan Roberts) and watched Laura’s approach.

“The two young people before us, through their love for one another, remind us of what it is that makes life precious to all of us — love, loyalty and courage,” the wedding officiant said. “Together in the face of extreme danger to themselves, they overcame powerful forces that sought to destroy Port Charles and its people, even the entire world.”

After the couple said their I Do’s, the reception was on. Their first dance was to the song I Could Have Danced All Night and then Robert made his best man toast.

“To Luke and Laura, may you always have what you have today,” he said, “the love of your friends and the everlasting love of each other.”

But it wasn’t all wine and roses on Luke and Laura’s big day, of course. When she threw her bouquet from the venue’s balcony, her ex-husband Scott Baldwin (Kin Shriner) caught it and professed that he was going to contest their divorce. Luke raced down from the balcony and slugged Scotty.

Although Laura was upset, Luke assured her that they were married and asked her to smile, which she did. They drove off in a vintage car, into what they hoped would be their bright future together.

Be sure to check out The Soap Scoop for General Hospital spoilers and news.

Other News And Spoilers 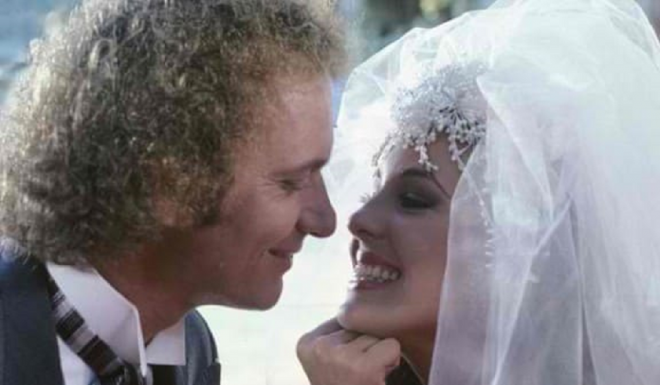