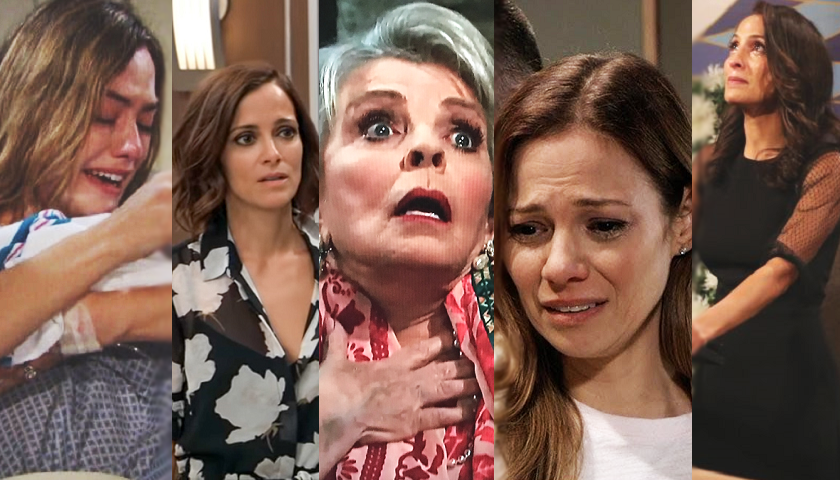 With the 47th Anuual Daytime Emmys fast approaching, we at The Soap Scoop are asking fans who they think should take home the coveted statues.

First up is Outstanding Supporting Actress. All four soaps, the Bold And The Beautiful (B&B), Days Of Our Lives (DOOL), General Hospital (GH) and the Young And The Restless (Y&R) are represented in this category. And five deserving actresses are vying for this award.

Let’s start with Y&R’s Christel Khalil (Lily Winters), who delivered a powerful and grief-stricken speech during the funeral for her father Neil Winters (the late Kristoff St. John). The scenes she submitted were from an episode that aired on April 25, 2019. Khalil was in mourning for real, as her long-time co-worker and friend St. John had passed away only two months earlier.

DOOL veteran actress Susan Seaforth Hayes (Julie Williams) submitted scenes from an October 4, 2019 episode. Julie believed she was going to die. She and her husband Doug Williams (Bill Hayes) enjoyed a final night out at the club and reminisced about their past.

Here are the nominees for Best Supporting Actress!

GH’s Tamara Braun (Kim Nero) submitted a touching scene where her teenage son Oscar Nero (Garren Stitt) found out he only had two months to live. In this episode from March 19, 2019, Oscar told Kim he was grateful she was his mother.

Rebecca Budig (Hayden Barnes), another GH actress, is also up for the award. She submitted a poignant scene from October 24, 2019. Hayden explained to Hamilton Finn (Michael Easton) why she lied to him about their daughter Violet (Jophielle Love).

Finally, we present Annika Noelle’s (Hope Logan) gut-wrenching performance from the January 4, 2019 episode (B&B’s 8000th). A heartbroken Hope was devastated when her husband Liam Spencer (Scott Clifton) told her their baby was stillborn.

Who do you think deserves the award for Outstanding Supporting Actress? Vote in our poll below!

Don’t miss the Daytime Emmys awards ceremony, which returns to network television for the first time in five years, on CBS this Friday, June 26 at 8 p.m. Keep reading The Soap Scoop for more updates, spoilers and news. And make sure you join our free B&B, Y&R, GH and DOOL Facebook Groups.