“Thank you to Brad Bell…thank you for writing such a deeply human and affecting story about opioid addiction,” MacInnes Wood, who plays Steffy Forrester, said while accepting her second Emmy. “I am so grateful to everyone at CBS for their support.”

Cady McClain, who played Jennifer Deveraux on DOOL, won for Outstanding Guest Performer. She thanked producers for letting her play such an iconic character. She also thanked Matthew Ashford (Jack Deveraux) for breaking down the character for her in less than two hours. 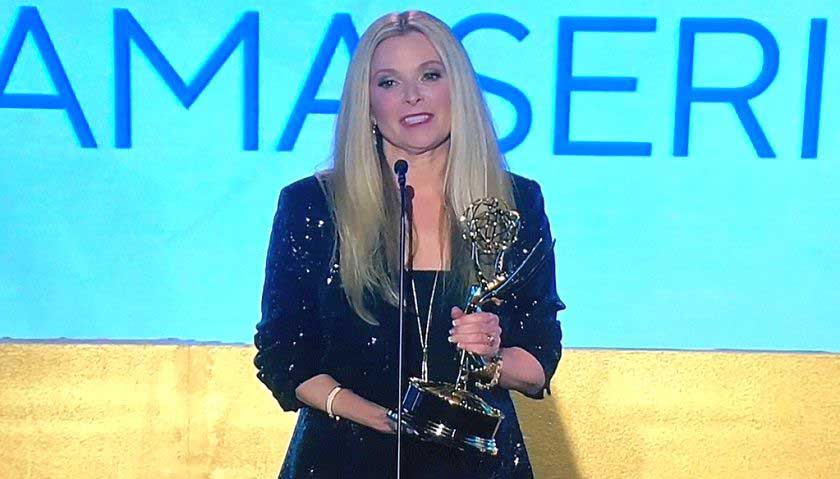 In accepting his Outstanding Supporting Actor award, Gail said he “can’t quite believe this has happened again. I welcome the chance to thank everybody at General Hospital.” He was also thankful to GH’s fans. Benard (Sonny Corinthos) also thanked Gail when he accepted his second Outstanding Lead Actor award. “Such a difficult disease and I hope we find a cure. Max Gail, I love ya.”

Konefal thanked her team. “The best team a little girl from Brooklyn can ask for,” she said. “To Days Of Our Lives – thank you so much for making this journey so much fun. There comes a moment in your life when you find yourself standing in the middle of your prayer and this is one of them.”

Studio City Was Sean Kanan’s “Love Letter To The Soaps”

Marla Adams accepted her trophy from home and dedicated her Outstanding Supporting Actress award to CBS and the Y&R. “I carry you all in my heart,” she said. “This is so awesome and I think you from the bottom of my heart.”

“This is incredible and I am so humbled,” Sean Kanan, the executive producer of Studio City. said in accepting his award for Outstanding Limited Drama Series. “I have had the honor and the privilege of working with so many of you in daytime and I wanted Studio City to be a love letter to the soaps.”

The Soap Scoop congratulates all of tonight’s deserving winners! Keep reading The Soap Scoop for more spoilers and news. And make sure you join our free B&B, Y&R, GH and DOOL Facebook Groups.