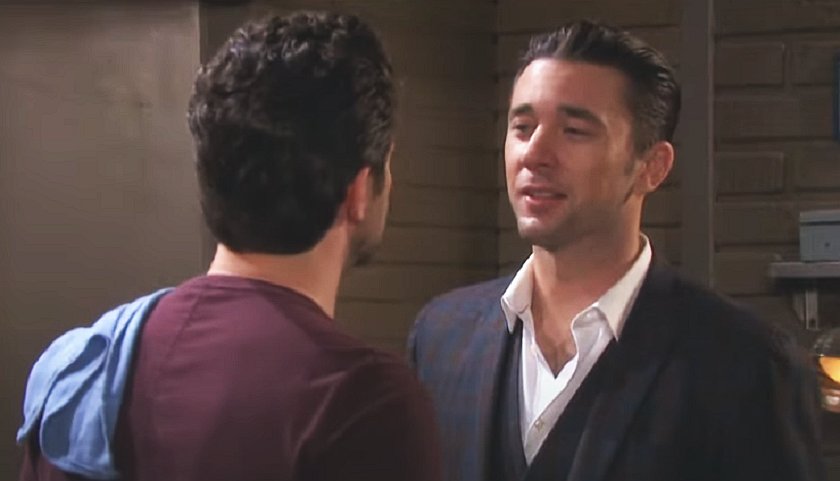 The Days Of Our Lives (DOOL) scoop for the week of October 12 hints Eli Grant (Lamon Archey) will struggle with a huge dilemma.

Also coming up this week, Chad DiMera (Billy Flynn) will reach out to Jake Lambert (Brandon Barash) as Gwen Rizczech (Emily O’Brien) puts a new plan in action. Plus, Kayla Brady (Mary Beth Evans) will suggest a way to find out if Tripp Dalton (Lucas Adams) is telling the truth.

Gwen will decide her best bet in getting ahead is to get to know Jack Deveraux (Matthew Ashford) and Jennifer Deveraux (Melissa Reeves) better. She’ll work on getting closer to the couple in the coming weeks, hoping she can use her new connection to them to her advantage.

Over with Chad, who will extend an olive branch of sorts to Jake. This will be thanks to Abigail DiMera (Marci Miller), who wants him to try to get to know his brother. So Chad will do it, mainly to appease his wife.

Meanwhile, Kayla will point out to Steve Johnson (Stephen Nichols) that if Tripp wants to prove his innocence, they need a DNA test on baby Henry. It really would solve the whole mystery of whether Tripp raped Allie Horton (Lindsay Arnold). But before that Steve is going to try to stop his buddy John Black (Drake Hogestyn) from attacking his son!

Finally, Eli will feel awful about once again going behind his wife’s back, although he is doing it to protect her. But instead of admitting what he’s done to Lani Price (Sal Stowers), he’ll come clean to Kristen DiMera (Stacy Haiduk). Then events will take a stunning turn. Kristen will plead guilty, hoping it gets Melinda Trask (Tina Huang) off Eli’s back for now.

Once Lani finds out, she will beg Melinda not to throw the book at her friend. She’ll suggest that now that Kristen has plead guilty, perhaps a plea bargain could be worked out. But later, Brady Black (Eric Martsolf) will make a suggestion to his lady love. Will Kristen go along with Brady’s plan?