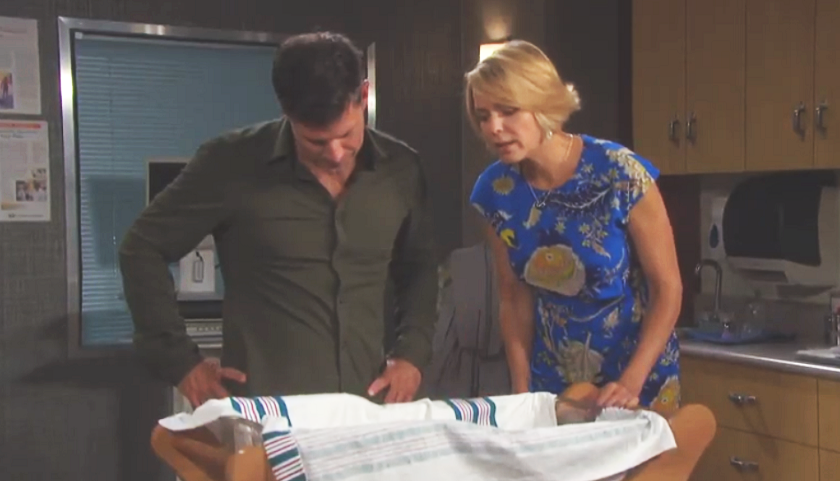 The Days Of Our Lives (DOOL) scoop for the week of March 9 hints Nicole Walker (Arienne Zucker) will discover the truth about baby Mickey.

Spoilers tease Nicole will walk in on a conversation between Brady Black (Eric Martsolf) and Kristen DiMera (Stacy Haiduk). They’ll be talking about their daughter who died and remembering she had a birth mark on her neck.

In the DOOL weekly preview, Nicole is with Eric Brady (Greg Vaughan) and she notices something odd about Mickey. “What’s that on her neck?” she says. Nicole will definitely know something’s up. Will she blow up Xander Cook (Paul Telfer) and Dr. Raynor’s (Victoria Platt) baby swap secret?

Days Of Our Lives Scoop: Will And Sonny Recommit To Their Marriage #DaysofourLives #DOOL #Days #WilSonhttps://t.co/oqUQ3eEJVq

Xander’s usual partner in crime, Victor Kiriakis (John Aniston) will also be on the hot seat this week. He’ll get an earful from Will Horton (Chandler Massey) for setting him up to take the fall in Adrienne Kiriakis’ (Judi Evans) untimely death.

Rumor has it, John will be frantic to find Marlena this week. But she’s currently stuck in Stefano DiMera (Stephen Nichols) and Dr. Rolf’s (William Utay) iron tight grip and John will have no luck. That doesn’t mean he’s throwing in the towel though. He’ll make a last-ditch effort to get Princess Gina (Kristian Alfonso) to help him. But will the royal one even give him the time of day when he pays her a visit?

Over with Chad, he will try to smother Gabi with a pillow while she’s in the hospital but will not succeed. And thanks to Stefano’s hold over him, he’ll also try to kill Kate Roberts (Lauren Koslow) later in the week.

Then there’s Rafe Hernandez (Galen Gering), who’ll be seething when he finds out Evan scored a legal victory of sorts, after he recanted his confession. He’d have quite a legal leg to stand on too, considering Ciara Brady (Victoria Konefal) held a gun on him, forcing him to say he’d killed Jordan Ridgeway (Chrishell Stause). He will also meet someone mysterious. Will it be Orpheus (George DelHoyo)?

Other spoilers tease Justin Kiriakis (Wally Kurth) will worry about losing Kayla Brady (Mary Beth Evans) and he’ll confide in Jack Deveraux (Matthew Ashford) about his fears. Will Jack be able to reason with him and calm him down?

At any rate, it looks like fans will be in store for another action-packed week. Keep reading The Soap Scoop for more Days Of Our Lives spoilers and news. And make sure you join our free Facebook Group.