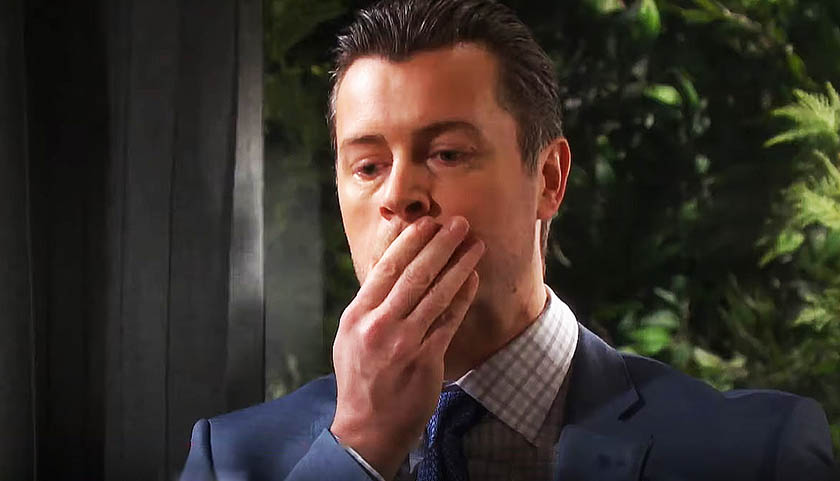 The Days Of Our Lives (DOOL) scoop for the week of July 19 hints that EJ DiMera (Dan Feuerriegel) will lose it after reading a letter from his sister.

Viewers should note, beginning July 23, DOOL will be preempted for two weeks, for the Summer Olympics, being held in Tokyo, Japan and broadcast on NBC. But not to worry, the sudser will return on Monday, August 9.

DOOL spoilers tease Ben Weston (Robert Scott Wilson) will be determined to stop Ciara from marrying Theo. And he’ll have lots of Salemites on his side. Both Allie Horton (Lindsay Arnold) and Claire Brady (Isabel Durant) will try their best to talk her out of the wedding. But will she listen to them?

Over with Xander, who may as well just ask to be punched when he tells everyone at Ericole’s anniversary party that Eric’s wife “couldn’t get enough of me.” Eric will haul off and strike him in the face. However satisfying that may be for Eric, what will it mean for he and Nicole? After their lovely reunion last week, things could take a heartbreaking turn.

Of course, Nicole’s not just going to rest on her laurels and take it. She knows Xander’s pronouncement had Sami’s fingerprints all over it. So, she’ll be out for revenge and nothing will stop her from getting it.

But first, Sami will have to deal with Lucas Horton (Bryan Dattilo). He wants to tell the truth about their affair, which is the last thing she wants. “I love you so much,” Lucas tells Sami in the DOOL weekly preview. However, if you love someone, you should set them free and Lucas will do just the opposite.

With prodding from Philip Kiriakis (Jay Kenneth Johnson), Lucas will use Nicole to his advantage. He’ll advise her to make sure Kristen DiMera’s (Stacy Haiduk) letter finally lands in EJ’s hands. “Please know that I take no pleasure sharing this information,” it says. “But you’re my brother and you have the right to know that Sami, the wife you adore, has been sleeping with another man.”