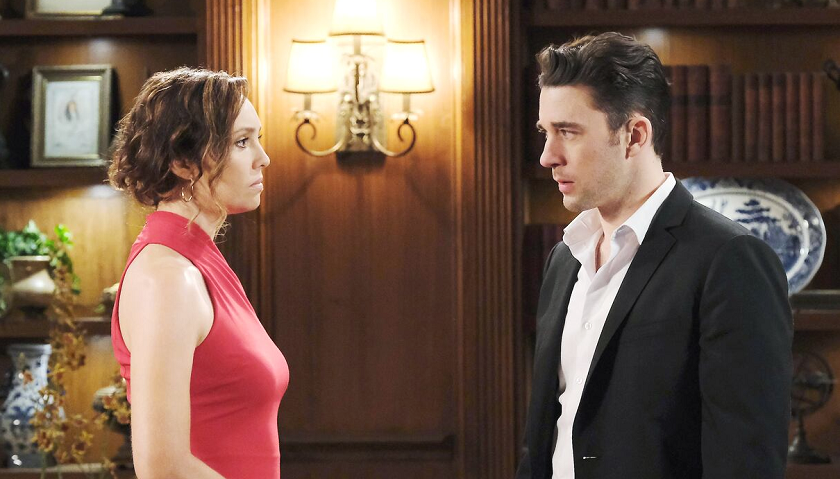 The Days Of Our Lives (DOOL) scoop for the week of January 4 hints Chad DiMera (Billy Flynn) will face threats from Gwen Rizczech (Emily O’Brien).

Spoilers tease Brady Black (Eric Martsolf) will have egg on his face when Kristen confronts him about his New Years Eve kiss. Viewers know it was just a friendly smooch and meant nothing to either of them. But to Kristen, it means everything. However, what can she do about it when she’s locked up in Statesville?

As for Chloe, she’ll attempt to help Philip Kiriakis (Jay Kenneth Johnson) get out of the sticky predicament he’s in. Xander Cook (Paul Telfer) has the goods on him and is preparing his knock out punch. Chloe will turn to Brady for assistance. “Philip is in serious trouble and we need your help,” she says to Brady in the DOOL weekly preview.

In the latest #DAYS, Jack and Jennifer reconcile. https://t.co/Gv7Weu4Q6W pic.twitter.com/xRTNgA7WgJ

Over with Kayla, who will be quite contrite as she apologizes to both Tripp Dalton (Lucas Adams) and his father. She’ll be stunned when Ava Vitali (Tamara Braun) tells her she has another son, Charlie Dale (Mike Manning). Kayla will realize he could be the one who raped Allie Horton (Lindsay Arnold). She believed the worst about Steve Johnson’s (Stephen Nichols) son and she’ll say sorry to both of them.

Speaking of Charlie, he won’t be so happy when Ben interrupts his plan to sleep with Claire. Rumor has it, Ben will sweep in and interrupt the couple. “Get the hell away from her,” he’ll say, as the couple are kissing on a bed.

Finally, Chad will find out Gwen lied about Abigail DiMera (Marci Miller) cheating on him. And now that he’s slept with her, he’ll suddenly realize he’s the one who cheated. He’ll implore Gwen not to tell anyone about their drunken roll in the hay.

When they return to the mansion, an angry Abby will tell Gwen: “I don’t want to see you near me or my kids ever again.” Gwen will insist that Chad make things right. Otherwise, she’ll spill all to his wife. Will Chad be able to convince Abby to rehire Gwen?