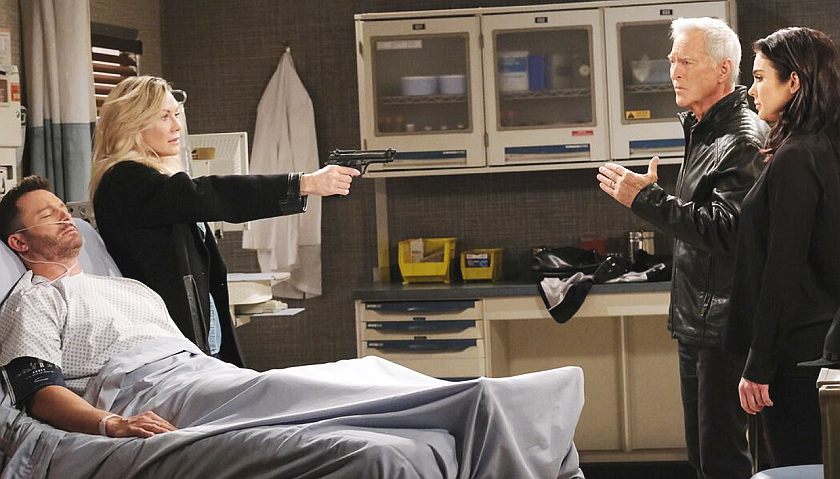 The Days Of Our Lives (DOOL) scoop for the week of January 25 hints an escaped Kristen DiMera (Stacy Haiduk) will threaten Chloe Lane (Nadia Bjorlin).

Spoilers tease Allie will remember the horrific night she was sexually assaulted, while she undergoes hypnosis. And she’ll know, without a doubt, that it was Charlie Dale (Mike Manning) who was responsible. At the same time, Steve Johnson (Stephen Nichols) will give DNA evidence to Shawn Brady (Brandon Beemer). Will Charlie finally pay for what he’s done?

Over with Xander, who will blab to Victor Kiriakis (John Aniston) about what Philip’s been up to. He’ll tell his uncle that Philip has been laundering money for the Vitali’s and Victor will be fuming when he finds out.

Other spoilers indicate Nicole Walker (Arianne Zucker) will help Rafe Hernandez (Galen Gering) celebrate his birthday. These two are hitting it off these days and may be headed for romance in the near future. Also, even though Abigail DiMera (Marci Miller) now knows Gwen Rizczech (Emily O’Brien) is her sister, she’ll still smack her. Plus, Ciara Brady (Victoria Konefal) will return.

Meanwhile, Brady will be seriously injured when the Vitali mob arrives in Salem. The hit men want to finish off Philip, but they’ll mistakenly target the wrong person and Brady will pay the price. He’ll be rushed to hospital after he’s shot in the gut and his diagnosis will be dire.

Finally, ever since Kristen saw the photo of Chloe and Brady kissing on New Year’s Eve, she’s been sitting around stewing about it. But then things will come to a boil when she finds out her beloved Brady has been shot. So when her brother Tony DiMera (Thaao Penghlis) pays her a visit at Statesville, she’ll take him hostage and escape the prison.

After Kristen rushes to Brady’s side, Chloe and John Black (Drake Hogestyn) will arrive in his hospital room. She’ll pull out a gun and threaten to shoot Chloe. Kristen blames her for what happened to Brady. Will John be able to talk her down?