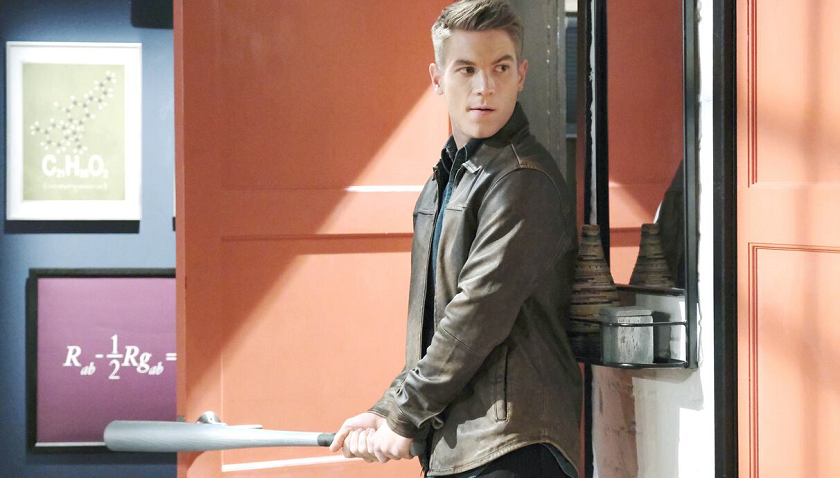 The Days Of Our Lives (DOOL) scoop for the week of January 11 hints Tripp Dalton (Lucas Adams) will confront Charlie Dale (Mike Manning).

Also coming up this week, Gabi Hernandez (Camila Banus) will return to Salem and Eli Grant (Lamon Archey) and Lani Price (Sal Stowers) will desperately search for their twins. Plus, Kate Roberts (Lauren Koslow) will tell Chad DiMera (Billy Flynn) he needs to spill the beans to his wife. But will it already be too late?

Spoilers tease Kate will be adamant her son tell Abigail DiMera (Marci Miller) the truth before she finds out from someone else. Chad cheated on her with Gwen Rizczech (Emily O’Brien) and although he may have been in a drug induced haze, he betrayed her nonetheless. But it doesn’t look like he’ll get the chance and once Abby finds out, she’s going to dump him.

Speaking of Kate, she’ll feel threatened when she sees Gabi back in town. As well she should, because Gabi is going to head straight into Jake Lambert’s (Brandon Barash) arms. Rumor has it, Jake will cheat on Kate with Gabi and it’s going to lead to the end of their May-December romance.

Over with Elani, who will recognize their twins’ kidnapper when they see a sketch. Last week, Dr. Raynor (Victoria Platt) was revealed as the baby snatcher. Viewers know she was also responsible for switching Sarah Horton’s (Linsey Godfrey) stillborn baby with Kristen DiMera’s (Stacy Haiduk) healthy child. It’s rumored someone hired Dr. Raynor to take the tots, but who?

Other spoilers indicate Xander Cook (Paul Telfer) will tell Philip Kiriakis (Jay Kenneth Johnson) he knows exactly what he’s been up to. “You’re laundering mob money for her,” he says to his nemesis in the DOOL weekly promo. If he can’t continue concealing the funds “the mob will kill me,” Phillip replies.

Finally, Tripp will visit Ava Vitali (Tamara Braun) in the hospital. “I need to know everything about Charlie,” he’ll say. And Ava will confess everything to him, including the fact that Charlie is his brother and he was the one who raped Allie Horton (Lindsay Arnold).

Then a furious Tripp will seek out his brother, looking for revenge and some good old fashioned payback. He’ll force his way into Charlie’s apartment and wait for him, baseball bat in hand. But will this confrontation lead to Charlie’s demise?