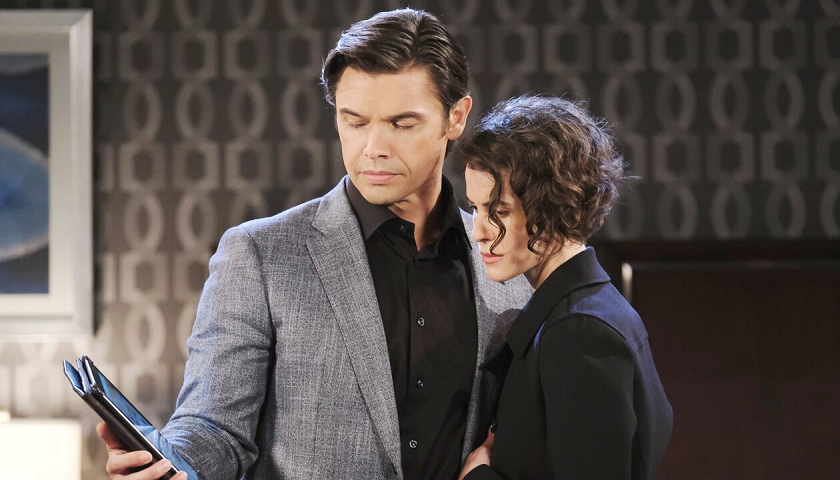 The Days Of Our Lives (DOOL) scoop for the week of December 14 hints Xander Cook (Paul Telfer) will explode when he finds out what Philip Kiriakis (Jay Kenneth Johnson) has been up to.

Also coming up this week, Anna DiMera (Leann Hunley) is on to Gwen Rizczech (Emily O’Brien) and Tony DiMera (Thaao Penghlis) will visit his sister as Joey Johnson (James Lastovic) looks forward to the future. Plus, Charlie Dale (Mike Manning) will spill the truth about London to Ava Vitali (Tamara Braun).

Spoilers tease Anna won’t let the grass grow under her feet after she meets Gwen. In the DOOL weekly preview, she’ll ask Gwen to sit with her so they can chat. Afterwards, a suspicious Anna will warn her family not to trust the nanny. But will they listen to her?

Anna’s husband Tony won’t want Kristen DiMera (Stacy Haiduk) to feel left out of the holiday festivities, so he’ll head to Statesville prison and pay his sister a visit. She’ll greet him with a smile and a hearty embrace.

Meanwhile, now that he’s been released from prison, Joey will enjoy a festive dinner with his parents Kayla Brady (Mary Beth Evans) and Steve Johnson (Stephen Nichols). “I’ve been dreaming of this for four years,” he will tell them.

Over with Charlie, who is getting closer with Claire Brady (Isabel Durant) by the day. Little does Claire know, she’s likely dating the man who raped her pal Allie Horton (Lindsay Arnold). Charlie will show up on Ava’s doorstep. Rumor has it, he’s Tripp Dalton’s (Lucas Adams) fraternal twin brother, which is the reason why Tripp’s paternity test showed he was baby Henry’s dad. Will Charlie admit to Ava that he was the one who attacked Allie in London?

Days Of Our Lives Scoop – Will Xander Cook Make A Beeline For Victor Kiriakis?

Finally, thanks to Sarah Horton (Linsey Godfrey), Xander will find out Philip is working for Ava. Rumor has it he’ll lose it.  He knew the Kiriakis heir was up to something but Xander will feel that he’s really crossed the line this time.

More than likely he’s going to make beeline for Victor Kiriakis (John Aniston) so he can snitch to his uncle. But how will Victor take the news?