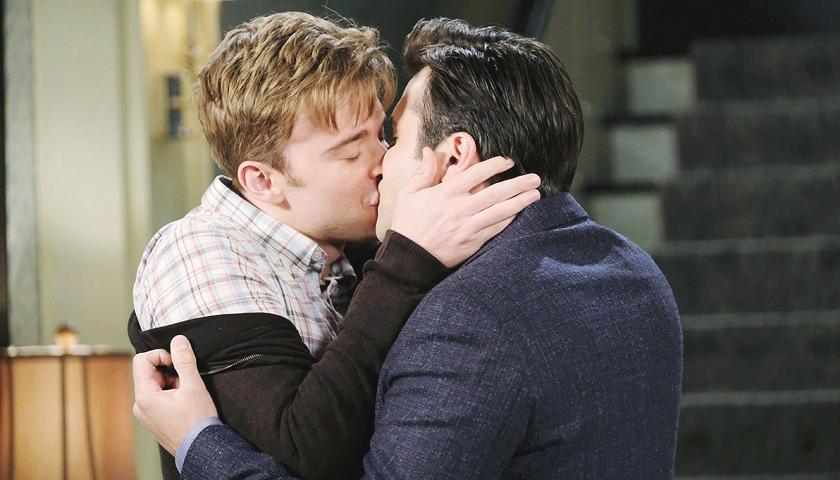 The Days Of Our Lives (DOOL) scoop hints Will Horton (Chandler Massey) and Sonny Kiriakis (Freddie Smith) will recommit to their marriage.

These two lovebirds were torn apart late last year by a tragic series of events that ended when Will was thrown in jail. He thought he’d killed Sonny’s mother on Mother’s Day but he couldn’t have been more wrong.

Maggie Kiriakis (Suzanne Rogers) recently confessed that she was the one responsible for Adrienne Kiriakis’ (Mary Beth Evans) death. “I was on the road that night,” Maggie told Sonny. “Will is innocent – I killed your mother.” And Sonny couldn’t contain his anger with her. “You got drunk and got behind the wheel!”

Will was released from prison soon afterwards but found out Sonny had been involved with Evan Frears (Brock Kelly). He was hurt, but he had told Sonny he wanted him to move on and live his life. Will thought he would be in prison for years, but thanks to Ciara Brady (Victoria Konefal) he found out he wasn’t responsible for Adrienne’s death after all.

In the latest #DAYS, Will and Sonny reunite. https://t.co/ZsCmioRrzb pic.twitter.com/5oF1rSMmWS

Sonny had divorce papers drawn up and was planning to move on with Evan and the two had even taken the next step in their relationship. But of course, Sonny had no idea he’d hooked up with fake and a murderer. Evan isn’t even his real name, it’s Christian Maddox.

He tried to be nice when he broke things off with Evan, after he found out the truth about Will. Sonny felt bad, he liked Evan but Will is his true love. Then Evan pulled a gun on him and held him hostage in his own home. Lucky for Sonny, Ciara came to the rescue, with Will at her side.

She disarmed Evan and then dragged him to the prison to stop Ben Weston’s (Robert Scott Wilson) execution. Evan was the one who had murdered Ben’s sister Jordan Ridgeway (Chrishell Stause). But that wasn’t all, it turned out he was also baby David’s biological father.

Viewers were rewarded with a Will and Sonny reunion last week and this week, spoilers tease they’ll recommit to their marriage. Will there be a romantic vow renewal ceremony coming up?

WilSon has been through their share of heartache and drama over the past few years, including a life-threatening health scare for Will. But their reunion and re-commitment to each other will be bittersweet for WilSon fans. Both Massey and Smith have been let go from DOOL and will be written out of the soap. Let’s hope they at least get the happy ending they deserve.