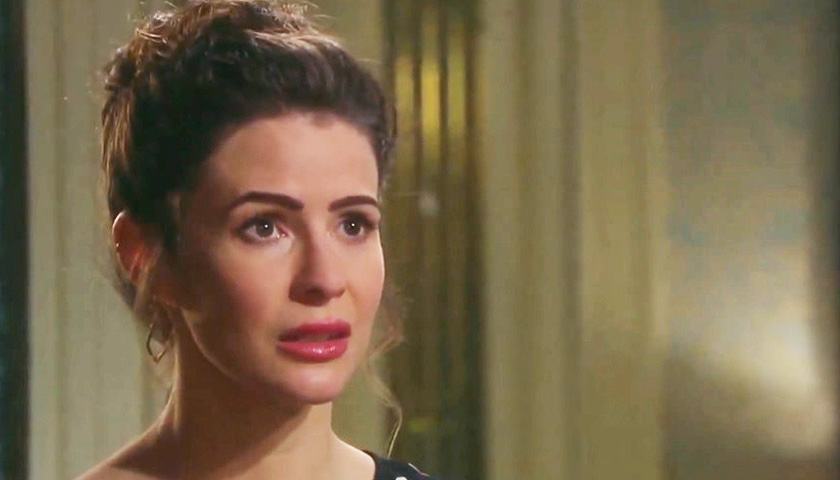 The Days Of Our Lives (DOOL) scoop reveals Sarah Horton (Linsey Godfrey) will return to Salem during the week of January 17.

Sarah has been missing in action since March 2021, when Kristen DiMera (Stacy Haiduk) knocked her over the head and kidnapped her. Then the villain paraded about town wearing a Sarah mask. She slept with Rex Brady (Kyle Lowder) and left Xander Cook (Paul Telfer) at the altar.

Since then, Kristen’s kept her out of site on a deserted island. And a heartbroken Xander returned to a life of crime and teamed up romantically with Gwen Rizczech (Emily O’Brien). And according to DOOL spoilers, Sarah is going to show up on Gwen’s doorstep on January 19th.

Other rumors indicate Sarah’s appearance will be in one of Gwen’s dreams. However, a spoiler for January 20th says Xander will be stunned to see her. Of course, Sarah has never been far from Xander’s heart and mind. Plus, when Rex returned to town and told him Sarah didn’t leave Salem with him, Xander became suspicious. So he recently he teamed up with Abigail DiMera (Marci Miller) to search for his long lost love.

Fans quickly expressed their excitement at the news. “Now that Sarah is returning soon,” one commented on Twitter. “Hopefully Xander can return to the lovable grey character that he is. Perhaps take over as CEO of Titan as well.”

“Very happy that @linseygodfrey is returning to #Days. I miss Sarah and Xander,” another fan said. Other viewers are confident a Xarah reunion is in the works. But they’re hoping it’s more of a slow burn and not rushed.

Days Of Our Lives Scoop – Will Sarah Horton And Xander Cook Reunite?

“He should feel stupid considering how many different masks he saw Kristen sporting right in front of him!” a viewer posted. “I’m not a Xarah fan, but if they’re going to get back together I at least want to see Sarah make him work for it.”

Godfrey has portrayed the character of Sarah since 2018 and has been popular since her debut. Previously, she played Caroline Spencer on the Bold And The Beautiful for six years. But Sarah’s return may not mean it’ll be all wine and roses for she and Xander. She was drugged on that island and Xander did fall for Kristen’s ruse. But will fans eventually see a Xander and Sarah reunion?

Welcome back to DOOL Linsey Godfrey – you’ve been missed! Keep reading The Soap Scoop for more Days Of Our Lives spoilers and news. And make sure you join our free Facebook Group.