The Days Of Our Lives (DOOL) scoop for the week of December 13 hints Xander Cook (Paul Telfer) will demand to know where Sarah Horton (Lindsey Godfrey) is.

Also coming up this week, John Black (Drake Hogestyn) will confront the possessed Marlena Evans (Deirdre Hall) at the cabin and Kate Roberts (Lauren Koslow) will be stunned. Plus, Sami Brady (Alison Sweeney) and Nicole Walker (Arienne Zucker) will face off once again.

DOOL spoilers tease Sami and Nicole will run into each other and get into it over EJ DiMera (Dan Feuerriegel). The two women will get slap happy until someone breaks them up. Also, Nicole and EJ will find themselves at odds and Sami will plant a smooch on her husband. But will he kiss her back?

DOOL Weekly Scoop – Kate Believes Her Son Is A Goner

Over with Kate, who will think Philip Kiriakis (Jay Kenneth Johnson) is a goner when she’s shown a prosthetic leg in a plastic bag.  “The leg belongs to Philip,” she’ll be told in the DOOL weekly promo. “My God!” she’ll say, weeping, as Roman holds her. But later in the week, she’ll walk into a room and be stunned to see her son, who is alive and well. Obviously, Philip will clue her in to his plan. And Kate will admonish him, but will she give him away? 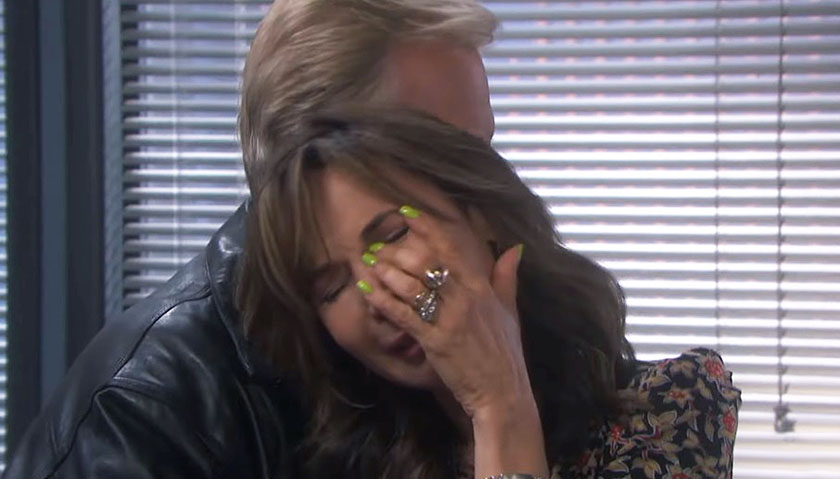 At Ben Weston (Robert Scott Wilson) and Ciara Brady’s (Victoria Konefal) cabin, John will try to tell Ben that Marlena isn’t who he thinks she is. “That is not Doctor Evans, that is…” he’ll say, as the demon inside his wife cuts him off mid-sentence. Rumor has it, Ben will knock John out and tie him to a chair. But when Shawn Brady (Brandon Beemer) arrives, will the jig be up for Marlena’s demon?

Other DOOL spoilers show Chloe Lane (Nadia Bjorlin) will decide she’s on team Brady Black (Eric Martsolf) and she’ll help him try to clear his name. Plus, Belle Black (Martha Madison) will search for answers about what really happened to Philip.

Finally, Gwen Rizczech (Emily O’Brien) will do her darndest to keep her boyfriend well away from Rex Brady (Kyle Lowder). She knows exactly where Sarah is and she isn’t with Kate and Roman’s son. Sarah is trapped on a deserted island, courtesy of Kristen DiMera (Stacy Haiduk). But it seems Gwen’s efforts will be all for naught when the couple run into Rex at Horton Square. Of course, Xander will immediately ask him where Sarah is.

“We were never to-gether,” Rex will say. Then he’ll tell his rival Sarah broke things off with him, right after Xander caught them together. “Where the hell is she?!” Xander will shout, as Rex walks away. But will he begin to suspect that his former fiancé fell victim to foul play?

At any rate, this looks like a great week you won’t want to miss! Keep reading The Soap Scoop for more Days Of Our Lives spoilers and news. And make sure you join our free Facebook Group.