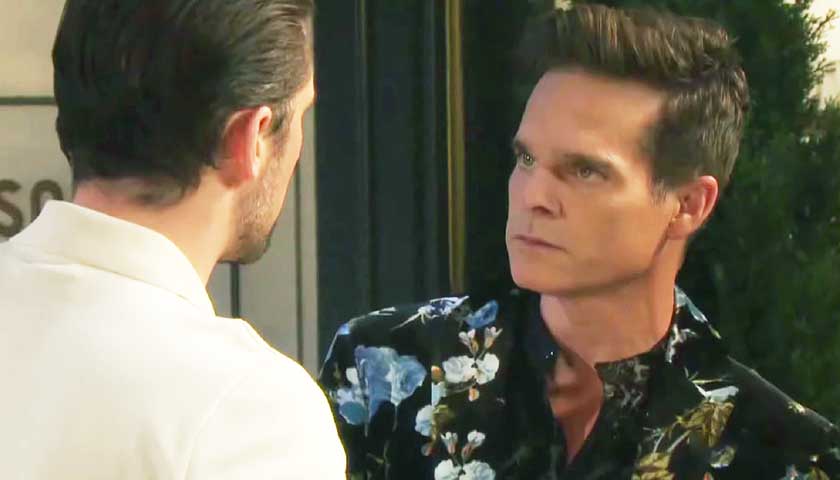 The Days Of Our Lives (DOOL) scoop for the week of August 8 hints Thomas DiMera (Cary Christopher) will see the Tooth Fairy in Horton Square.

DOOL spoilers tease viewers will find out Li is Dr. Rolf’s partner. He’ll visit the lab on Tuesday to see what progress Rolf has made. It looks as though Li has been funding the doctor’s work all along. But how will Gabi Hernandez (Camila Banus) feel when she finds out?

Meanwhile, Xander and Sarah believe Gwen Rizczech (Emily O’Brien) was the one who killed Abigail DiMera (Marci Miller). “We have to prove that Gwen left the prison that night,” Xander says to Sarah in the DOOL weekly preview.

So, in order to do so, Xarah will need information they can only get from Statesville. So, Xander will stroll into the prison, wearing a priest’s collar and he’ll greet the warden. “Hello, I’m Father Callum O’Brien,” he’ll say, in an Irish accent. However, will Xander find anything out?

Finally, an excited Thomas will spot the Tooth Fairy in Horton Square. “Look, there he is!” he’ll tell Chad DiMera (Billy Flynn) as he points at Leo Stark (Greg Rikaart). As viewers know, Thomas and Charlotte DiMera (Autumn Gendron) met Leo in the tunnels, shortly before their mother was killed.

However, Leo will notice Thomas pointing at him and will try to get away. But to no avail, because an angry Chad will catch up with him and make a stunning statement. “My son met you in the basement the day my wife was murdered.” But did Leo kill Abigail?

At any rate, it looks like a great week is coming up! Keep reading The Soap Scoop for more Days Of Our Lives spoilers and news. And make sure you join our free Facebook Group.

Days Of Our Lives Scoop: Fans Sound Off On Sudser's Move From NBC To Peacock #Days #DOOL #DaysofourLives https://t.co/2LfdkTtCgc