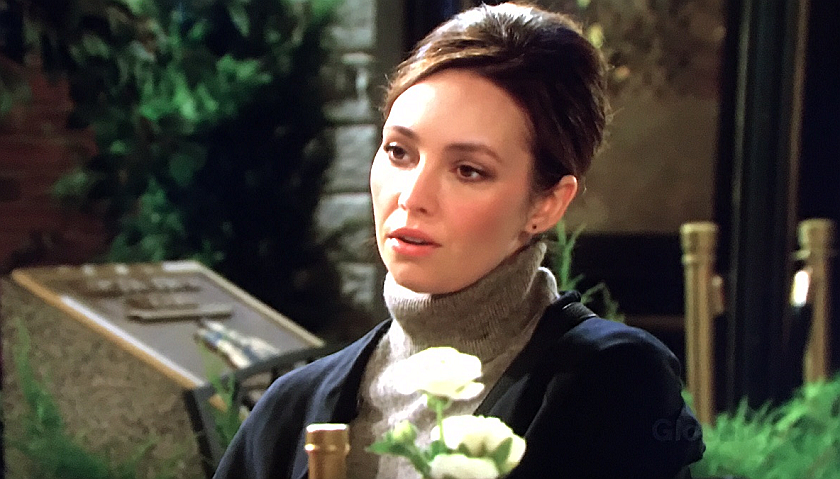 As viewers know, Abigail asked Gabi to team up with her after her wild cemetery confrontation with her half sister. She’s convinced that Gwen killed Laura Horton (Jamie Lyn Bauer) and she’s dead set on proving it.

At first, Gabi was hesitant to help her nemesis. After all, wasn’t she accused of drugging her just last year? But Abigail refreshed her memory, reminding her that Gwen let her take the blame for it.

“She knew that you were innocent while you were being dragged away to prison for drugging me. And she didn’t say a word,” Abigail told Gabi. “Don’t you think she deserves just a little bit of payback for what she did?”

More than likely, the two women will stow the schemer in one of the rooms under the DiMera estate. Gabi knows them well, she’s been held captive there herself. But once they’ve got her hidden away, what are they going to do?

Spoilers tease Abigail will use every trick in the book to obtain a confession from her sister. She wants her to pay for killing her grandmother. Viewers also know Gabi isn’t above anesthetizing someone, which is why she was accused of drugging Abigail in the first place. So, will they glean a confession from Gwen?

However, there may be a hitch in their plan. Jack Deveraux (Matthew Ashford) will begin to worry when he realizes he hasn’t heard from Gwen in quite some time. He knows Abigail is out for revenge and he’ll suspect she may have something to do with whatever has happened to Gwen.

Rumor has it, Jack will take his concerns to Chad DiMera (Billy Flynn). But will they figure out what Abigail and Gabi have done before it’s too late and the women have gone too far?

In the latest #DAYS, Abigail and Gwen get into a physical altercation. https://t.co/ZsCmiozQaB pic.twitter.com/YMATZ7j87S