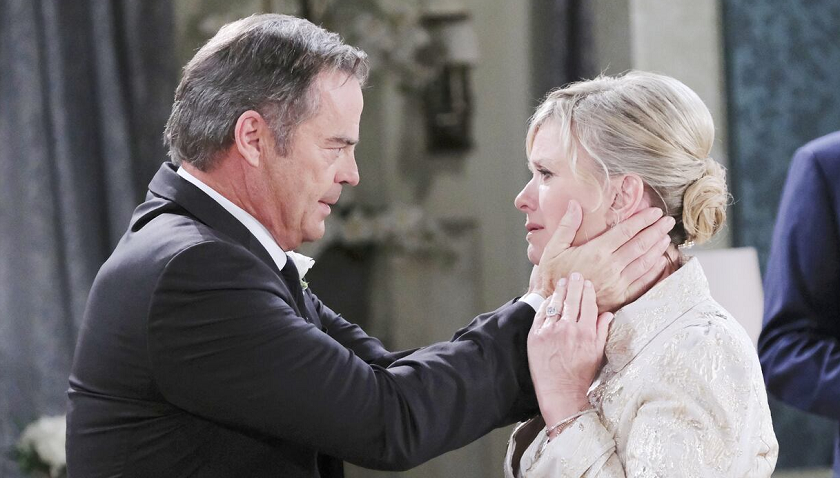 Also coming up, Marlena Evans (Deirdre Hall) will comfort John Black (Drake Hogestyn), as he laments his best friend’s departure. Plus, Kayla will be faced with a tough decision.

Spoilers tease, John will be down in the dumps, knowing Steve Johnson (Stephen Nichols) is leaving town. The two men have been through a lot in the past couple of decades, and John wishes Steve would stay.

On Tuesday, Steve announced to John and Marlena he was leaving Salem. He wants Kayla to be happy, but he just can’t stick around and watch it. His love for his ex-wife has never faded and he knows he’ll be miserable if he has to see her around town with Justin.

What Steve doesn’t know is that there’s trouble brewing for Kayla and Justin. Thanks to Hope Brady (Kristian Alfonso), Justin is well aware of the fact that Steve still has feelings for his betrothed.

He’s also beginning to wonder if Kayla still has feelings for Steve. On the other hand, Justin is still mourning the death of his wife Adrienne Kiriakis (Judi Evans). And on Thursday, he’ll run into a familiar face that will throw him for a loop, to say the least.

But back to the wedding, as officiant Will Horton (Chandler Massey) says, “Speak now or forever hold your peace,” Justin will have a confession to make. Will he tell Kayla Steve isn’t over her and still loves her?

Then, Kayla will be faced with a tough decision. And rumor has it, she’s not going to marry Justin. Of course, none of this comes as a surprise. DOOL fans knew from the onset that this couple was doomed.