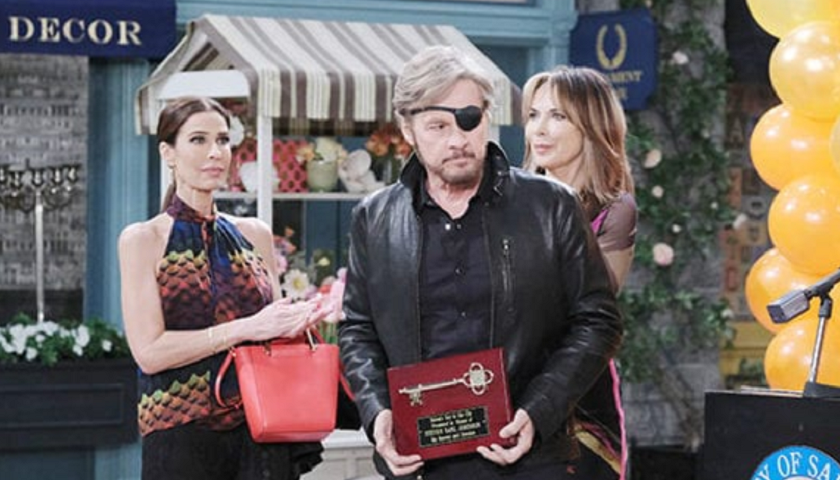 Spoilers tease that after hearing Hope and Jennifer Deveraux (Melissa Reeves) gossiping about Steve and his true feelings for Kayla, Justin will ask Hope for details. As viewers know, Steve has confided in Hope quite a bit in recent weeks.

Hope is well aware that Steve is still in love with his ex and is devastated that she’s remarrying. However, he doesn’t want to interfere with her happiness and her relationship with Justin.

After all, Steve did tell Kayla to forget about him and be with Justin. But when Justin presses her for the truth, will Hope be willing to share details of Steve’s true feelings with Kayla’s husband-to-be?

Later, Justin will share a tender moment with his father Victor Kiriakis (John Aniston) and his son Sonny Kiriakis (Freddie Smith) just before his wedding ceremony begins. Both men will be supportive and will wish him well.

Meanwhile, as Kayla prepares to marry Justin, she’ll start thinking of her past with Steve. She had been madly in love with him, and he with her, and she won’t be able to help but wonder how different things would be if she was marrying Steve instead.

Speaking of Steve, he will make a shocking announcement to Marlena Evans (Deirdre Hall) and John Black (Drake Hogestyn). He will tell them he’s leaving town. Kayla is marrying Justin and Steve feels like there’s nothing left for him in Salem.