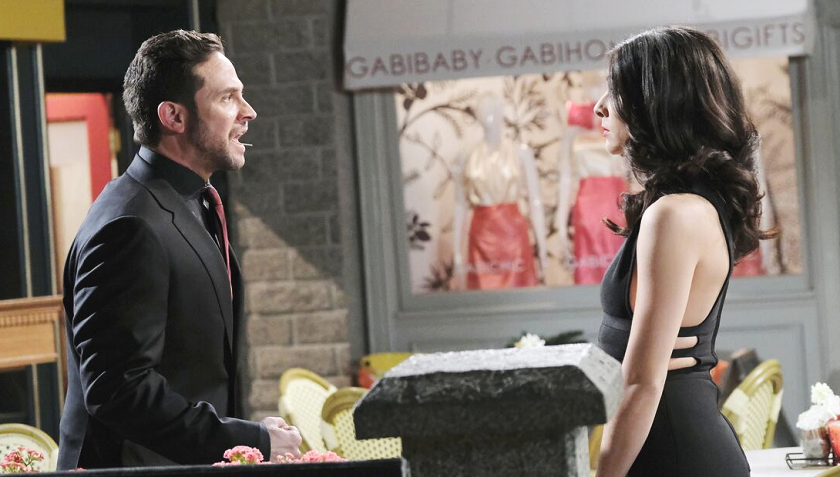 The Days Of Our Lives (DOOL) scoop for Tuesday, August 11 hints Gabi Hernandez (Camila Banus) and Jake Lambert (Brandon Barash) will have a huge argument.

Spoilers tease Ben will continue to have dreams and haunting hallucinations about killing his new wife. Thanks to Eve Donovan (Kassie DePaiva) and her indoctrination of Ben, he’s been programmed to murder Ciara.

Days Of Our Lives Scoop – How Long Can Ben Weston Control Himself?

Obviously, he’s trying to resist these horrible thoughts. Ciara is the love of his life and normally the last thing he would want to do is harm her, in fact he’s saved her life several times. The former necktie killer also wants to tell Ciara about his visions, but he believes he can control these strange feelings he’s having. But for how long?

Over with Kate, who will talk to Abe about her decades-long, embittered rivalry with Vivian Alamain (Louise Sorel). The two women hated each other for years and she’ll tell her boss about Vivian’s latest stunt, blackmailing her to get the truth serum for Jake.

Will Kate also discuss Vivian’s deception years ago, when she stole Kate and Victor Kiriakis’ (John Aniston) embryo, so she could give birth to Philip Kiriakis (Jay Kenneth Johnson) and raise him? Kate, of course, believes her nemesis is dead. But viewers know she only faked her death, so she could get out of jail.

Other DOOL spoilers tease that Justin Kiriakis (Wally Kurth) will have a surprise for Bonnie Lockhart (Judi Evans). On Wednesday, she told Justin her sob story about how she’s not selling enough books and feels like her publisher is conning her. When she asked Justin to represent her, he refused. Has he changed his mind?

Finally, Jake and Gabi will end up in another screaming match. The two of them will be standing outside the bistro, after their dinner with Li Shin (Remington Hoffman), arguing about something. Is Jake going to realize that Gabi is just using him to get what she wants – control of DiMera Enterprises?