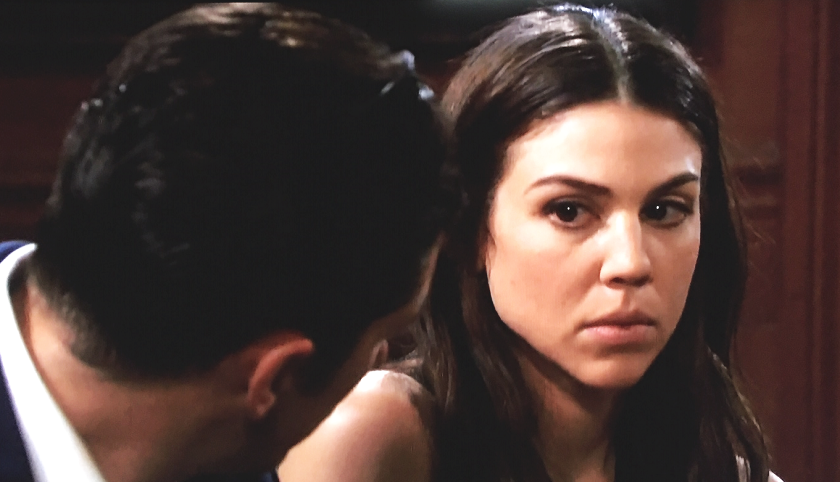 As viewers know, Abigail has been having some very real and horrific visions. She keeps seeing Ben Weston (Robert Scott Wilson) standing before her with a necktie, preparing to kill her. “Ben was here and he tried to strangle me,” she told Chad, who in turn, told her Ben was not there at all.

Considering Abi has had challenges in the past, when it comes to her sanity, her terrible hallucinations were troubling. She wondered if she was losing her mind again. But instead of keeping it to herself, she sought Kayla’s (Mary Beth Evans) help.

On Tuesday, she’ll find out something shocking – there’s a strange drug in her system that’s causing her to see things that aren’t there. Chad, of course, will blame Gabi Hernandez (Camila Banus) and he’ll confront her.

Over with Hope, who feels incredibly guilty for her actions as Princess Gina. Spoilers tease she will apologize to John Black (Drake Hogestyn) and Marlene Evans (Deirdre Hall) for making their lives a living hell. But will they forgive her?

Meanwhile, Rafe will be devastated when Justin gives him terrible news about his plan to adopt David. The adoption is now on hold and may be over for good, due to Evan Frears’ (Brock Kelly) custody bid.

Finally, rumor has it that Kayla will lay into into Steve. Viewers can expect many tears, some shouting and a lot of recriminations coming Steve’s way. Will Kayla and Steve ever find their way back to each other?