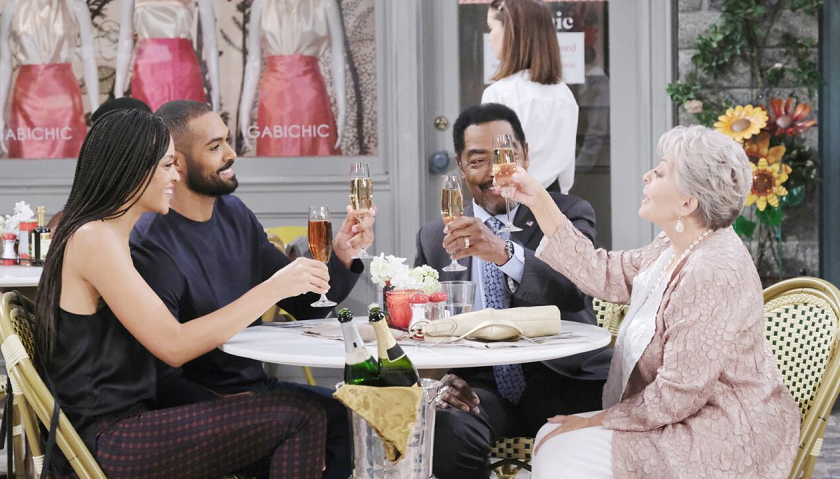 The Days Of Our Lives (DOOL) scoop for Thursday, June 4 hints Jack Deveraux (Matthew Ashford) will give Steve Johnson (Stephen Nichols) some advice.

Spoilers tease Eli and Lani will get together with Julie Williams (Susan Seaforth Hayes) and Abe Carver (James Reynolds) to give them good news. “I’m pregnant,” Lani will tell them. And her dad and Eli’s grandma will be thrilled when they find out the couple is expecting a child.

Lani, however, is still struggling with the prospect of losing another child. She’s decided to go ahead with the pregnancy, but in the back of her mind she’s wondering if it’s the right decision. “I’m so scared,” she will tell Eli.

Meanwhile, Rafe will go head to head with Zoey Burge (Alyshia Ochse) to gain custody of David. But he won’t be alone in his battle and he’ll have a powerful ally on his side. Rumor has it, Hope will go to bat for Rafe.

Other spoilers suggest that Zoey will visit Orpheus (George DelHoyo) and blast him for possibly ruining her chances at adopting David. She’ll ask him what kind of judge would award custody to a woman whose father kidnapped the child. This will be Orpheus’ last DOOL appearance, at least for awhile, and viewers can expect Zoey to really let her father have it.

Finally, Steve has just encountered Kayla Brady (Mary Beth Evans) and Justin Kiriakis (Wally Kurth). “Justin and I are engaged,” she told him. Although he already knew this, since he witnessed Justin’s hospital proposal, that doesn’t mean it hurts Steve any less hearing it from Kayla’s lips.

Jack knows his brother is having a hard time accepting Kayla’s engagement. “You don’t like the idea of Kayla being married to someone else,” he’ll say to Steve. “Now you’re scaring me,” Steve will respond. “It’s like you’re reading my mind.” Will Jack advise Steve to tell his sweetness how he really feels?