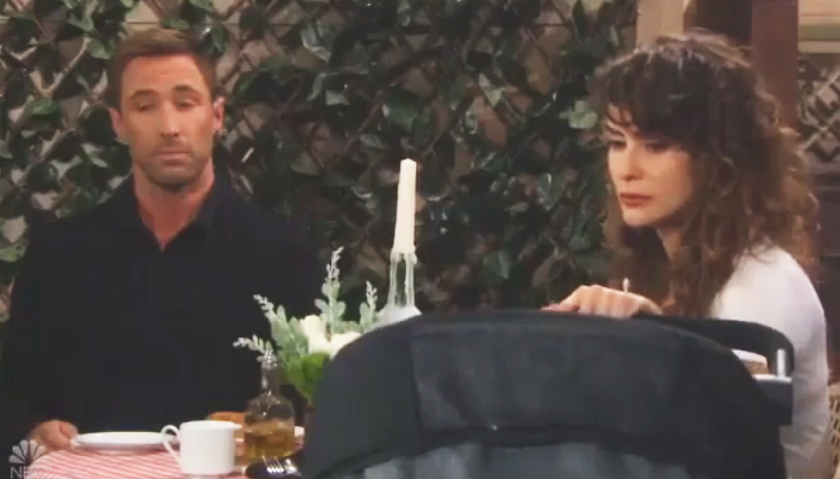 The Days Of Our Lives (DOOL) scoop for Monday, May 4 hints Sarah Horton (Linsey Godfrey) will beg Rex Brady (Kyle Lowder) to keep her secret.

Also coming up on Monday, Gabi Hernandez (Camila Banus) will accuse Jake (Brandon Barash) of lying. Plus, Abigail DiMera (Kate Mansi) will have another horrifying vision and Kristen DiMera (Stacy Haiduk) will admit something to Lani Price (Sal Stowers).

DOOL viewers know Kristen and Lani formed an unlikely alliance when they were novitiate nuns in Italy. And she’ll make a confession of sorts to her friend, who also happens to be a police officer. Is Kristen going to admit she’s the one who stabbed Victor Kiriakis (John Aniston)?

Brady Black (Eric Marsolf) is currently taking the rap for her crime in order to protect her. Is Kristen willing to return the favor? Will she tell Lani the truth?

Over with Abi, who will once again have a terrible hallucination. She’s envisioned Ben Weston (Robert Scott Wilson) standing before her with a necktie and Orpheus (George Del Hoyo) getting ready to blow her into smithereens. What will Abi see on Monday?

Meanwhile, Gabi will accuse Jake of lying about his identity. As Ben said to his fiance Ciara Brady (Victoria Konefal) on Wednesday, Jake looks exactly like Stefan DiMera and his body language is also identical.

Days Of Our Lives Scoop – Is Jake Really Stefan DiMera Or Just His Doppelganger?

A furious Gabi believes Jake is Stefan and she will vent her anger on the mechanic. She has been mourning the loss of her husband for more than a year and she’ll want to know why he’s been hiding from her. But is Gabi right, is Jake really Stefan, or just a doppelganger?

Finally, now that Rex knows she’s on the run with Rachel, Sarah will implore him not to tell anyone. When she returned to the cafe to grab Mickey’s blanket on Friday, Rex kept hold of it. Sarah told him to give her daughter’s blanket back. “Sure, except that’s not your daughter, is she?” Will Rex turn Sarah in to the authorities?