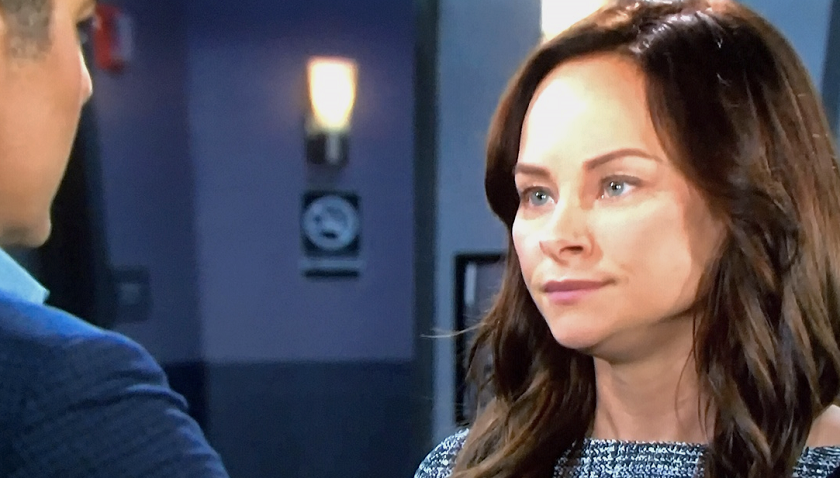 The Days Of Our Lives (DOOL) scoop for Friday, May 22 hints Zoey Burge (Alyshia Ochse) is keeping a secret from Rafe Hernandez (Galen Gering).

Abigail and Chad will have a frank discussion about what lies ahead for them. He knows his wife isn’t well and will tell her they have some difficult decisions to make. Although Abby’s tried to hide some of her hallucinations from others, including her husband, she knows in her heart she isn’t getting any better. So what will Chabby decide to do?

Over with Steve, who is deeply concerned about his best friend. Marlena Evans (Deirdre Hall) has asked for his help to find her husband, who has been kidnapped by Orpheus. Steve will tell Kayla and Justin about the situation with Orpheus and may even ask them for their advice.

Orpheus himself will brag to John about his plans. Now that his son Evan Frears, aka Christian Maddox (Brock Kelly), will be spending his life in prison, he plans to bring up his grandson. But he’ll need money and an escape route.

Viewers know the villain’s usual modus operandi is to play tricks and use mind games to get what he wants. But will any of this work on his nemesis? And spoilers tease he’ll knock John out with some chloroform and make a phone call – but to whom?

Days Of Our Lives Scoop – Is Zoey Burge Trying To Keep Rafe Hernandez Off Orpheus’ Trail?

Finally, does Zoey know where her father has taken John and David? Rafe has already been questioning whether or not he can trust Zoey, and with good reason. She told him her father kidnapped Maggie and was responsible for Adrienne Kiriakis (Judi Evans) and baby Mickey’s deaths.

Zoey also told Rafe that Orpheus is “a dangerous man,” but did she really mean it? Rumor has it, she’s still keeping a secret from Rafe and he’ll remain wary of her. Has she been confiding in Rafe to keep him off her father’s trail?