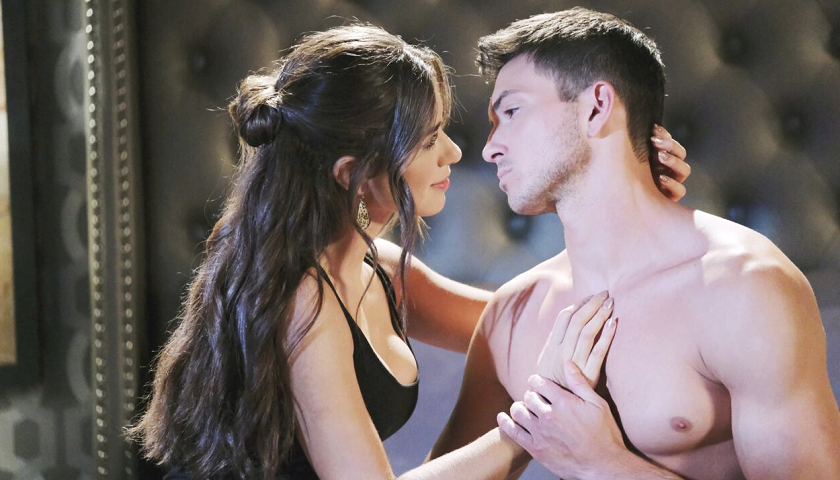 The Days Of Our Lives scoop for Friday, May 1 hints that Ciara Brady (Victoria Konefal) and Ben Weston (Robert Scott Wilson) will celebrate his new job.

Also coming up on Friday, Kristen DiMera (Stacy Haiduk) will be distressed that Victor Kiriakis (John Aniston) has regained consciousness.  Plus, Rex Brady (Kyle Lowder) will learn that Sarah Horton (Linsey Godfrey) is on the run.

Let’s start with Kristen, who is well aware that Victor’s recovery only means one thing – she’s going to be arrested for attempted murder. She stabbed Victor in the heat of the moment and left him for dead. Kristen will realize that now that he’s awake, he’ll surely tell the authorities who was responsible.

At the hospital, Victor’s family will be thrilled that he’s woken up. They too will be curious about who did this to him. But none more than Eli Grant (Lamon Archey), who will question the Kiriakis patriarch on Friday. What will Victor tell Eli? Will he even remember what happened?

On Thursday’s episode, DOOL viewers saw the return of Rex. We haven’t seen him since he left Salem in August 2019. He departed directly after Sarah admitted to him that she was in love with his brother Eric Brady (Greg Vaughan).

Now that Sarah has encountered Rex in Paris, she’ll be in panic mode. And as she prepares to flee the city with Rachel, Rex will discover she’s on the run. She broke his heart last year, so will he decide to help her or turn her in?

Over with Ciara and Ben, who will be in celebration mode. Jake (Brandon Barash) the mechanic has offered him a job working at a local garage. He’s happy to have secured employment, however, he’s still taken aback by Jake’s uncanny appearance.

When he first saw Jake, he was in shock. Ben was sure he was looking at the late Stefan DiMera.  Nevertheless, the couple will rejoice over his new position. Viewers can expect to see some sizzling hot Cin scenes to wrap up the week.