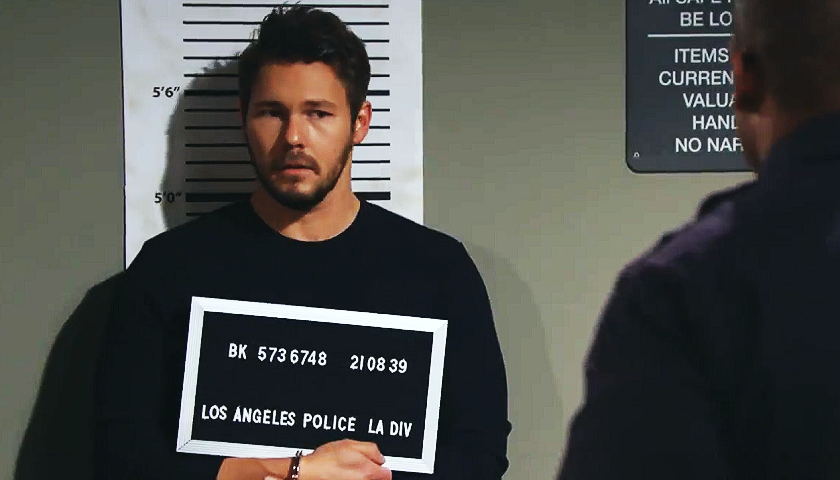 The Bold And The Beautiful (B&B) scoop for the week of May 31 reveals Liam Spencer (Scott Clifton) will be arrested for Vinny Walker’s (Joe LoCicero) murder.

Also coming up this week, Hope Spencer (Annika Noelle) will be distraught and will turn to her mother. She will also tell Bill Spencer (Don Diamont) he’s at fault for everything. Plus, Bill will try to take responsibility and Steffy Forrester (Jacqueline MacInnes Wood) will return to LA.

Spoilers tease Steffy and Dr. Finnegan (Tanner Novlan) will find out the gender of their unborn baby. Once they discover whether they’re having a boy or a girl, Sinn will begin making preparations for the arrival of their bundle of joy.

At the police station, Bill will make a last minute plea to his son. “You had motive. There is no evidence,” he tells Liam in the B&B weekly promo. “I took care of everything.” But he won’t listen and will go ahead and confess to killing Vinny Walker (Joe LoCicero).

Liam will tell Deputy Chief Baker (Dan Martin) it was an accident. And he’ll leave his father out of it. But Baker won’t be buying what Liam’s selling. “It doesn’t sound like an accident,” Baker will say. “It was murder.” Then the chief will have Liam charged with the crime and thrown in jail.

A distressed Hope will first forgive her husband for everything. But she’ll become angry when she watches him being cuffed and taken away. Then she’ll head to Spencer Publications and put Bill on blast. “Liam is behind bars because of what you did,” she’ll tell him. And she’ll be surprised when he agrees with her.

In a desperate bid to get his son out of the slammer, Bill will head to the cop shop to take the blame for the hit and run. It’ll lead to some frustrating moments for Baker as he tries to untangle the two men’s stories.

Finally, Hope will sob in her mother’s arms as she recounts the events of the last few days. A stunned Brooke Forrester (Katherine Kelly Lang) will listen as Hope tells her Liam has been arrested for Vinny’s death, but Bill covered it up. How will Brooke react to this shocking news?

Hope expresses her fear of losing Liam and their family forever. Watch the latest #BoldandBeautiful episodes for free on @CBS or subscribe for more on @paramountplus: https://t.co/4mS0hjoxlW. pic.twitter.com/N00Ymjkwiu

2 Thoughts to “Bold And The Beautiful Weekly Scoop May 31 to June 4: Liam Is Charged With Murder – Hope Blames Bill – Steffy Returns To LA”