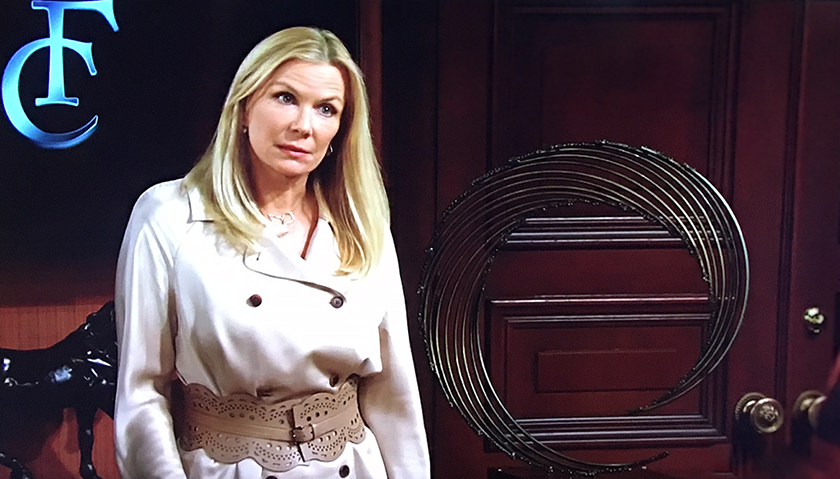 The Bold And The Beautiful (B&B) scoop for the week of May 7 reveals Brooke Forrester (Katherine Kelly Lang) will be stunned.

Also coming up this week, Shauna Fulton (Denise Richards) will cover for her bestie and Liam Spencer (Scott Clifton) will hide his feelings from his wife. Plus, Wyatt Spencer (Darin Brooks) will be annoyed and Ridge Forrester (Thorsten Kaye) gets defensive.

Spoilers tease Ridge will cast a watchful eye as Deputy Chief Baker (Dan Martin) questions his son. Baker is under the impression that Thomas Forrester (Matthew Atkinson) may have killed Vinny Walker (Joe LoCicero). Ridge will defend Thomas and tell Baker he’s barking up the wrong tree. But will the chief believe him or will it make him even more suspicious?

Meanwhile, Wyatt is well aware that something’s up with his brother and his father. It seems like every time he walks into a room, Liam and Bill Spencer (Don Diamont) stop talking. He’s finding it annoying and suspect at the same time. So when he asks them what’s going on, will they tell him the truth?

Speaking of Liam, he will try to hide the pain he’s feeling about Vinny’s death. Of course, Hope Spencer (Annika Noelle) has no idea her husband is the one who hit Vinny and left him for dead. But will Liam’s strange behavior tip her off?

Then there’s Shauna and Quinn Forrester (Rena Sofer). With B&B spoilers indicating Shauna is going to cover for Quinn, will her best friend tell her about her steamy night with Carter Walton (Lawrence Saint Victor)? If Eric Forrester (John McCook) finds out she didn’t come home all night, Quinn will need an alibi. Will her bestie provide her with one?

Finally, Brooke will be flabbergasted when Carter defends the mistakes Quinn made in the past. She’ll find it extremely odd and questionable that he’d have anything good to say about Eric’s wife at all.

Brooke will also be quick to remind Carter that Quinn was the mastermind behind the plot to break up her and Ridge. However, Carter will point out that no one is all good or all bad and Quinn has some redeeming qualities as well. He should know! But will Brooke be suspicious after her conversation with the Forrester COO?