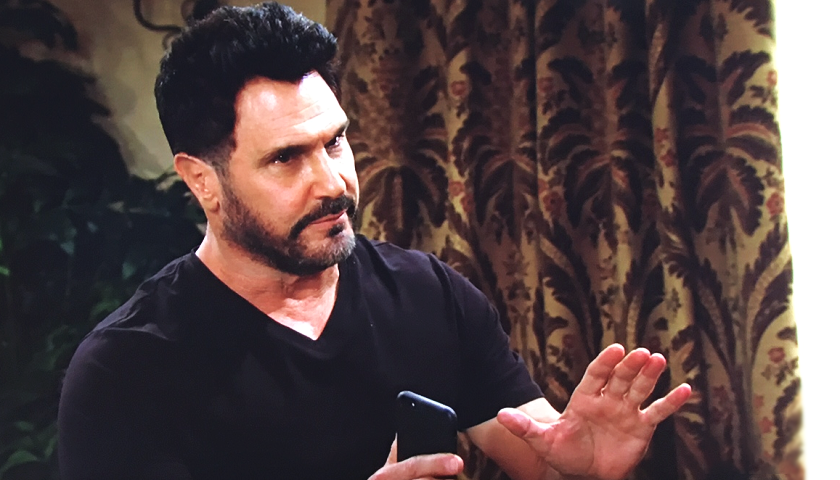 The Bold And The Beautiful (B&B) scoop for the week of April 19 reveals Bill Spencer (Don Diamont) will interrupt his son’s attempted confession.

Spoilers tease Zoe will approach Carter at Forrester Creations. “I can understand why you would be afraid to trust me again,” she tells him in the B&B weekly promo. But his response won’t be what she wants to hear.

“If you truly wanted me, you don’t go after another guy,” he’ll say. However, Zoe will tell him she misses him and hopes someday he’ll want to hold her in his arms again. But are her pleas a case of too little, too late?

Speaking of which, Quinn will attempt to revive her passionless marriage. Both she and Eric Forrester (John McCook) have confided in others that their marriage is missing the intimacy it used to have. However, when Quinn tries to seduce her husband, will he outright reject her?

Meanwhile, Sanchez and Baker will banter, as they speculate on who could have left Vinny for dead. But will they come up with a list of suspects? If they keep digging, perhaps they’ll hit pay dirt and figure out it was Liam Spencer (Scott Clifton).

Rumor has it, Liam will be so guilt-ridden while he’s talking to Hope Spencer (Annika Noelle), that he’ll start to confess. But before he gets a chance to say much, Bill will intervene and sweep him out of the building. Later, Hope will talk to Thomas Forrester (Matthew Atkinson) about how off Liam has been lately. Thomas will say he’s probably just got a lot on his mind.

Finally, Bill will be ticked off when Baker intrudes on a romantic moment between he and Katie Logan (Heather Tom). But will the deputy chief be there to question Bill about Vinny’s death and if so, what will he tell him?

A person keeping a deadly secret fears they’ve been busted. Watch the latest The Bold and the Beautiful episodes for free on @CBS or subscribe for more on @paramountplus: https://t.co/ZHy2uhsLov. pic.twitter.com/EalMk8gLBN