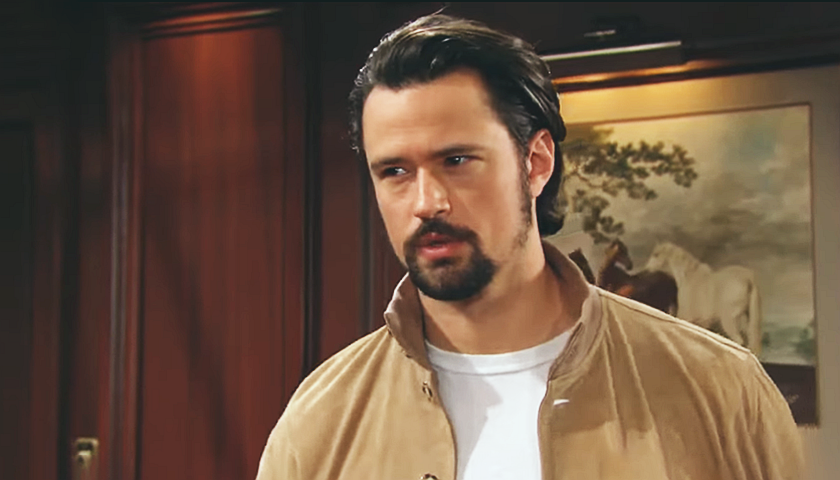 The Bold And The Beautiful (B&B) scoop for the week of April 12 reveals Thomas Forrester (Matthew Atkinson) will be stunned to hear Vinny Walker (Joe LoCicero) was murdered.

In addition, Liam Spencer (Scott Clifton) will spiral out of control and Eric Forrester (John McCook) will confide in his son. Plus, Lieutenant Baker (Dan Martin) will show up at Forrester Creations and Zende Forrester (Delon de Metz) will ask Carter Walton (Lawrence Saint Victor) to forgive his former fiancé.

Spoilers tease Zende will apologize to Carter. He knows sending the text to Zoe Buckingham (Kiara Barnes) ultimately ended their relationship. Zende would like nothing more than to be on good terms with Carter once again. He’d like a chance to redeem himself and he’ll tell Carter he thinks Zoe also deserves another chance. But how will Carter react?

Speaking of second chances, Ridge Forrester (Thorsten Kaye) will ask his dad how it’s going with Quinn Forrester (Rena Sofer) since they reunited. Rumor has it, Eric will confide that things aren’t going well at all. There’s been a disconnect between them since Quinn moved back in and Eric’s not sure if they’ll ever get their spark back.

Bold And The Beautiful Poll: Liam's Got A Deadly Secret – But Who Will He Confide In? Vote in our poll! #BoldandtheBeautiful #BoldandBeautiful https://t.co/Q5s2EbFHL3

Meanwhile, Bill Spencer (Don Diamont) will tell Liam he needs to get a grip on himself. He knows if his son doesn’t calm down, both of them will get caught. But Liam can’t stop panicking. “They’re going to find me and I’m gonna pay,” Liam says to his Bill in the B&B weekly promo.

Bill will do his best to cover for Liam as the days roll on, specifically at Spencer Publications. Wyatt Spencer’s (Darin Brooks) spidey senses will be tingling and he’ll ask his father if something’s wrong. But Bill will lie and make light of any questions he has.

Finally, Lieutenant Baker will show up at Forrester Creations to question everyone about Vinny. B&B spoilers tease that Thomas, who will still be reeling from identifying his best friend’s body,  will be shocked to learn Vinny’s death wasn’t just a hit and run.

“You actually think someone killed Vinny on purpose?” Thomas will ask Baker. The lieutenant will confirm that Vinny was murdered and he’ll also name his prime suspect. But who will it be?