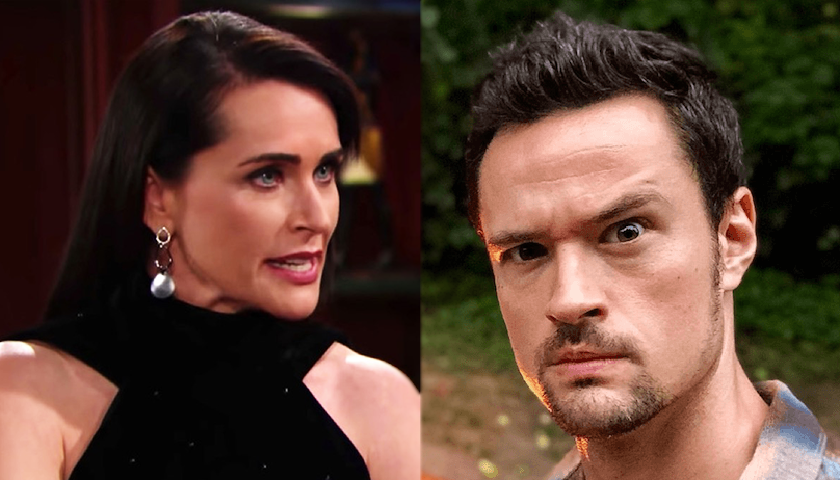 Bold And The Beautiful (B&B) spoilers reveal Thomas Forrester (Matthew Atkinson) will suggest to Quinn Forrester (Rena Sofer) that they team up.

The Thumb-Sucking, Diaper-Wearing Degenerate, as Bill Spencer (Don Diamont) so aptly named him, will hear about Quinn’s showdown with Brooke. He’ll then think it’s only natural that they should work together to get rid of their nemesis once and for all.

Although Quinn will be intrigued by the offer, she may also have some misgivings. She’ll have to question whether she really wants to team up with Eric Forrester’s (John McCook) grandson to take down her husband’s ex-wife.

Then again, Brooke has interfered in her marriage and managed to get Quinn’s best friend Shauna Fulton (Denise Richards) kicked out of Eric’s guest house. She also recently told Shauna that Brooke had better watch her back, because she was coming for her. “I’m going to put an end to her,” she said.

On the other side of the battle, Brooke will also form a strong posse. She’ll obviously have the support of her daughter Hope Logan (Annika Noelle) and sisters Donna Logan (Jennifer Gareis) and Katie Logan (Heather Tom).

And soon enough, she’ll also have Katie’s fiance Bill on her side as well. He can’t stand Quinn or Thomas, so the idea of battling those two is a win-win for Bill.

But back to Quinn, what will she do? Will she decide to take Thomas’ offer and team up with him to seek revenge on her nemesis? Spoilers tease Quinn will tell Thomas she’s in and is willing to do whatever she has to in order to end Brooke.

These two are a fierce combination, to be sure. But will they be have what it takes to take down Brooke?

One Thought to “Bold And The Beautiful Scoop: Will Quinn Team Up With Thomas To Take Down Brooke?”