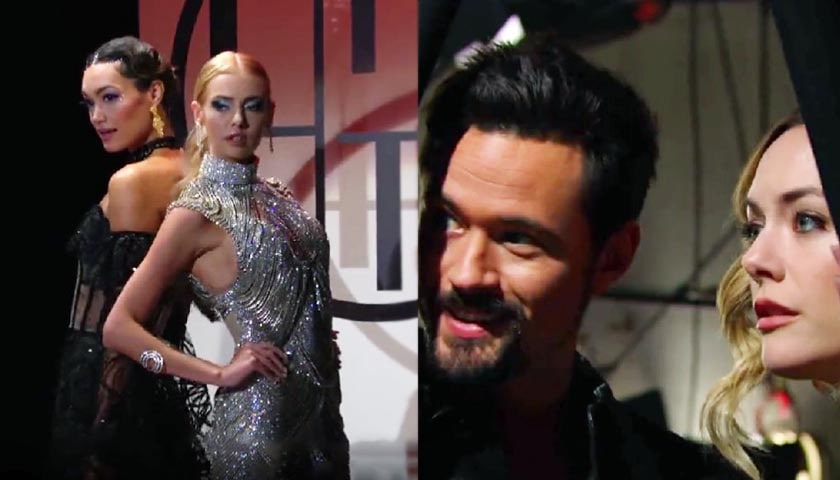 The Bold And The Beautiful (B&B) scoop for Wednesday, November 2 reveals the Forrester Creations fashion show will begin.

In addition, Liam Spencer (Scott Clifton) will need to make a decision, when it comes to his love for his wife and his suspicions about Thomas Forrester (Matthew Atkinson).

B&B spoilers tease Liam will struggle with whether he should attend Hope Spencer’s (Annika Noelle) fashion preview. He wants to be there to support his wife’s big day. Even though he admitted on Tuesday he couldn’t wait for it to be over. “I feel like I’m on the outside looking in and it’s not a great feeling,” he told his wife.

However, Liam is also highly distrustful of Hope’s head designer. Thomas claims to be a changed man. And while Hope believes him, Liam doesn’t. He’s convinced that Thomas is still obsessed with Hope and he won’t be sure if he can handle watching the two of them at the preview. So, will Liam decide to stay away?

Meanwhile, Steffy Forrester (Jacqueline MacInnes Wood) and Katie Logan (Heather Tom) will greet reporters and buyers as they arrive at Forrester for the show. “You are in for a huge surprise,” Steffy tells them in a B&B preview. “If there’s one thing that you can count on from Forrester Creations it is to expect the unexpected,” Katie will add.

The episode will include appearances by Big Brother 24 (BB24) contestants Joseph Abdin and Monte Taylor. The men will portray superstar fashion reporters Sid and Del. And BB24 winner Taylor Hale will also appear, as Mackenzie the model.

But before the preview begins, Hope Spencer (Annika Noelle) will deliver a speech to the buyers and media in the packed showroom. At first, she’ll be a little nervous. “We need rave reviews and everyone needs to be inspired,” she said to Thomas on Tuesday. But then Hope will remember Thomas’ words of encouragement, “they’ll love you Hope, how can they not?” And when she glances over, she’ll see Thomas cheering her on.

Finally, the Hope For The Future preview will get underway. Hope and Thomas will be filled with a nervous anticipation as they watch the models hit the runway from backstage. But will the show be a hit?