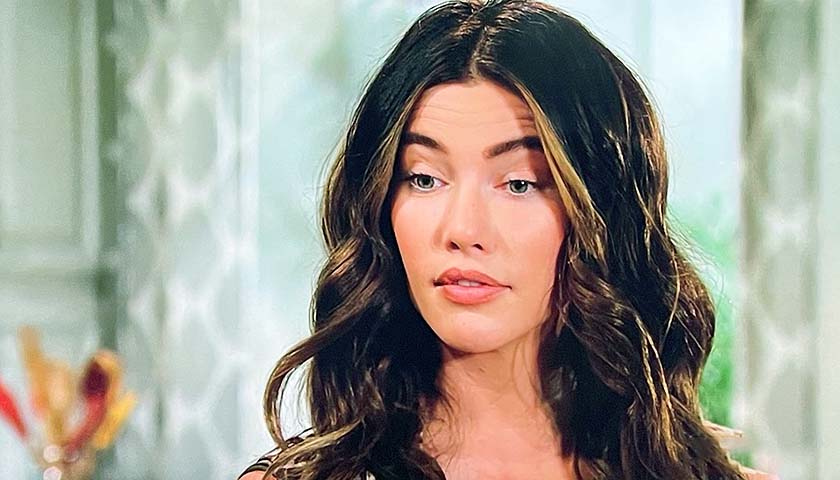 The Bold And The Beautiful (B&B) scoop for Tuesday, September 20 reveals Steffy Forrester (Jacqueline MacInnes Wood) will intercept a call meant for her father.

In addition, Deacon Sharpe (Sean Kanan) will have a challenging day, as he once again tries to stop Sheila Carter (Kimberlin Brown) from doing something she’ll regret.

B&B spoilers tease Sheila will remain obsessed with her son and her grandson. She believes she can still salvage her relationship with Finn (Tanner Novlan). Of course, he’d have to overlook the fact that she tried to kill both he and Steffy. But stranger things have happened.

Sheila also recently snuck into the cliff house and held her grandson, which may have put a chilling idea in her head. She’ll wonder if she should focus her energy on Hayes, instead of Finn. Could a kidnapping scheme be far behind?

Nevertheless, Deacon will try to convince his roommate with benefits that going anywhere near her son and his family is a very bad idea. But unfortunately, Sheila will block out every bit of Deacon’s common sense advice. Her selective hearing won’t allow negative thoughts.

Meanwhile, Steffy will also remain obsessed, but with getting her parents back together. One would think a strong and beautiful 30-something woman would have better things to do than worry about her mother and father’s love lives. But here we are.

Bold And The Beautiful Scoop – Brooke’s Preparations All For Naught

On Monday’s B&B, Brooke excitedly planned a special evening for her and Ridge. “Ridge and I always shine when we shut out the real world,” she told Hope Spencer (Annika Noelle). “Tonight, I intend to remind my husband of what makes us so good together.”

However, Brooke’s preparations will be all for naught. Because when she calls her husband, Steffy will pick up. She’ll tell Brooke that Ridge and Taylor Hayes (Krista Allen) are sharing an up-close and personal moment together. Then she’ll refuse to let Brooke speak with her husband. But will Steffy ever stop interfering in her parent’s personal lives?