The Bold And The Beautiful (B&B) scoop for Tuesday, November 9 reveals Katie Logan (Heather Tom) will have it out with Quinn Forrester (Rena Sofer).

B&B spoilers tease Ridge was stunned when he walked in the door, only to find Brooke and Hope Spencer (Annika Noelle) talking with Deacon in the living room. His first reaction was to try and drag Hope’s father out of the house.

However, Deacon will push back, telling Ridge all he wants is a chance to get to know his daughter. Ridge has no sympathy for Deacon and he’ll tell him to get bent. The Forrester CEO doesn’t want Deacon anywhere near Hope or Brooke and he’ll look to his wife to back him up. 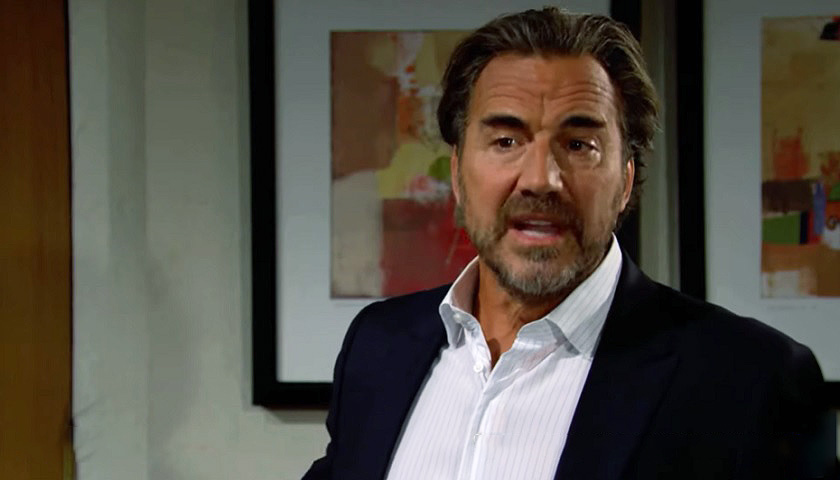 But that’s not going to happen. Brooke already told Ridge to leave Deacon alone. On Tuesday, she’ll tell her husband “Hope wants him to stay,” and a huge argument will result. Deacon will eventually leave and Hope will be furious with Ridge for interfering. She just had a breakthrough with her mother and father and now Ridge has ruined it.

Meanwhile, Katie has been angry since Thursday, when she discovered her sister packing her desk at Forrester Creations. Donna Logan (Jennifer Gareis) explained that Eric Forrester (John McCook) had no choice but to fire her. Once Quinn found out about she and Eric’s moments together, she demanded that Eric banish her.

Of course, Katie was furious and didn’t think it was fair. But then she overheard Quinn badmouthing she and her sisters. And not only will she put her on blast, but she’ll do it in the presence of Carter Walton (Lawrence Saint Victor).

The middle Logan sister will be so livid that she’ll itemize each of Quinn’s past crimes. Viewers better settle in because it’s not exactly a short list! Quinn will surely fight back but she’ll also quickly realize that Katie is not the easy mark that her sister was. But will Carter be forced to intervene during the conflict?

Bold And The Beautiful Poll: Was Firing Donna The Right Thing To Do? Vote in our poll! #BoldandBeautiful #BoldandtheBeautiful #Queric #Deric https://t.co/ynKkN1lE4V