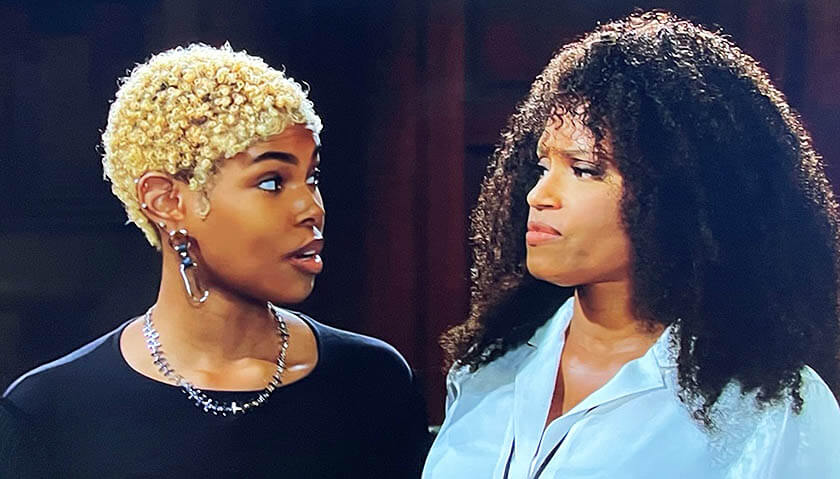 The Bold And The Beautiful (B&B) scoop for Tuesday, January 25 reveals Dr. Grace Buckingham (Cassandra Creech) will pry into her daughter’s personal life.

In addition, Brooke Forrester (Katherine Kelly Lang) will be anxious, when she discovers Douglas Forrester (Henry Joseph Samiri) is spending time with his father.

B&B spoilers tease that Brooke will drop by the cabin, hoping to have a friendly chat with Douglas. But when Hope Spencer (Annika Noelle) tells her he’s with Thomas Forrester (Matthew Atkinson), she’s going to freak out.

B&B Daily Scoop – Brooke’s Marriage Would Be In Trouble

Since she found out on Thursday that Douglas saw her kissing Deacon Sharpe (Sean Kanan), Brooke has been waiting for the other shoe to drop. The only people who know her secret are Deacon, Hope and now Liam Spencer (Scott Clifton).

Of course, Douglas also knows, but he doesn’t know exactly what he saw when he looked through her window on New Year’s Eve. All he knows is that he witnessed his grandma Brooke kissing Santa Claus.

Brooke trusts that Hope and Liam won’t spill the beans, but Douglas is a whole other story. “Douglas saw me kissing Deacon,” she’ll say to her daughter and son in law. And she knows if he tells Thomas, Steffy Forrester (Jacqueline MacInnes Wood) or Ridge Forrester (Thorsten Kaye) her marriage will be done like dinner. “They’ll figure out what he’s really saying,” she told Hope on Monday. “It’s going to lead them back to me.”

Bold And The Beautiful Scoop – Will Paris Admit Their Involvement?

Finally, Paris Buckingham’s (Diamond White) mom will question her about her relationship with Carter Walton (Lawrence Saint Victor). She’ll watch her daughter and the Forrester COO making eyes at each other and will become suspicious.

Then Paris will find herself on the hot seat as her inquisitive mother is determined to get to the bottom of what’s going on in her daughter’s love life. She may even ask her point blank if she’s seeing Zoe Buckingham’s (Kiara Barnes) ex-fiancé. But will Paris admit that she’s become romantically involved with Carter?