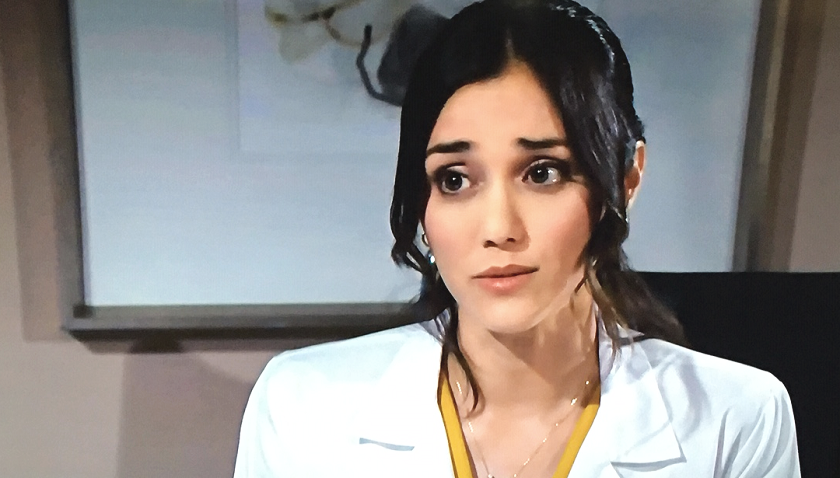 Spoilers tease the doctor will take matters into her own hands next week, when she ends up in the middle of a brutal argument between Flo and Sally Spectra (Courtney Hope).

On Tuesday, Penny berated Sally for the depths she was willing to sink to in order to fool Wyatt Spencer (Darin Brooks) into believing she was dying. “The walker, the makeup, all to make yourself look sick,” the doctor said.

“Don’t judge me,” Sally told her. “My plan’s going to work. I am the best woman for Wyatt…Flo is pure trash.” Then she said she’s going to fake it until she makes it.

Rumor has it, Flo will show up at Wyatt’s beach house and accuse Sally of faking her fatal illness, which of course she is. She’ll also have evidence of this, after she snooped around on Penny’s laptop.

On Thursday’s episode, viewers saw Flo find the evidence she needed to prove that Sally is lying. “Oh my God!” Flo exclaimed, as she discovered the shocking truth. The only thing Sally was suffering from was stress. Other than that, Flo will see that her nemesis is perfectly healthy and has been all along.

Bold And The Beautiful Scoop – Will Flo Fulton Get The Chance To Spill To Wyatt Spencer?

Armed with the truth, Flo will toy with Sally about what she’s found. She wants Sally to dig an even deeper hole for herself than she already has. But eventually, it will prove to be too much for her and she will tell the fiery redhead that she knows the truth.

After Penny arrives, Flo will tell the two women that she is going to spill everything to Wyatt. Then, not feeling like she has any other choice, Penny will knock Flo out. Details about how she does it are scarce, but she is a doctor with access to medications. Will she plunge a syringe into Flo’s arm? Whatever she does, it will result in Flo lying unconscious on Wyatt’s floor.