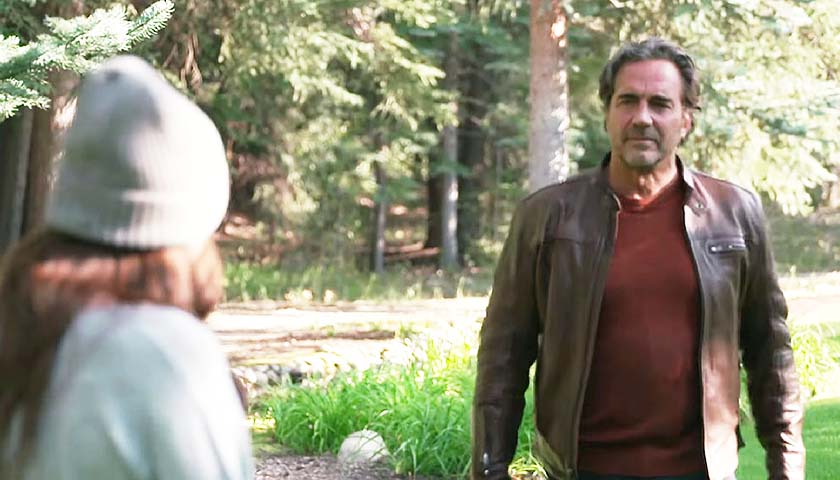 The Bold And The Beautiful (B&B) scoop for the week of October 3 reveals Ridge Forrester (Thorsten Kaye) will track down Taylor Hayes (Krista Allen) in Aspen.

In addition, Brooke Forrester (Thorsten Kaye) will be stunned when her husband doesn’t believe her. Plus, Bill Spencer (Don Diamont) will provide some key information. And Thomas Forrester (Matthew Atkinson) will thank Hope Spencer (Annika Noelle) for believing in him.

B&B spoilers tease Hope and Thomas will grow closer this week, and he’ll be amazed at how supportive she is. Hope will tell say she knows Douglas Forrester (Django Ferri) isn’t in any danger with him and he’ll appreciate her backing him up.

Meanwhile, Ridge will face off with Brooke. She’ll be confused when he asks her about calling CPS again. After all, she already denied calling them. But Ridge will be adamant that she tell him the truth. So, when she says she is being truthful, her husband won’t believe her and he’ll storm off.

Brooke will try to contact him but Ridge won’t reply to any of her texts. She’ll have no idea where he is, until Bill tells her Steffy and Taylor are staying at his cabin in Aspen. And a lightbulb will go off. Then Brooke will book a flight on the Forrester Creations jet. Her destination? Why Aspen of course!

Other B&B spoilers tease Donna Logan (Jennifer Gareis) will share her worries about her sister with Eric Forrester (John McCook). Plus, Liam Spencer (Scott Clifton) will be suspicious of Thomas’ motives, as usual.

Finally, Taylor and Steffy Forrester (Jacqueline MacInnes Wood) will settle in at Bill’s cabin in Aspen. A tearful Taylor will open up to her daughter about her feelings for Ridge. “I don’t want him to be with me because Brooke let him down again,” Taylor tells Steffy in the B&B weekly preview. “I want him to choose me because I am his first choice.”

But unfortunately, it looks like Ridge may do just that. He’ll be convinced that Brooke is the one who called CPS on his son and he’ll show up in Aspen. As Taylor takes a stroll in the woods, she’ll see Ridge walking towards her. She’ll sigh and ask him why he’s there. And he’ll tell her he wants to be with her. But is Ridge just reacting to what he believes Brooke did? Or was his wife’s phone call to CPS the final motivation he needed to be with Taylor, the woman he really wants?