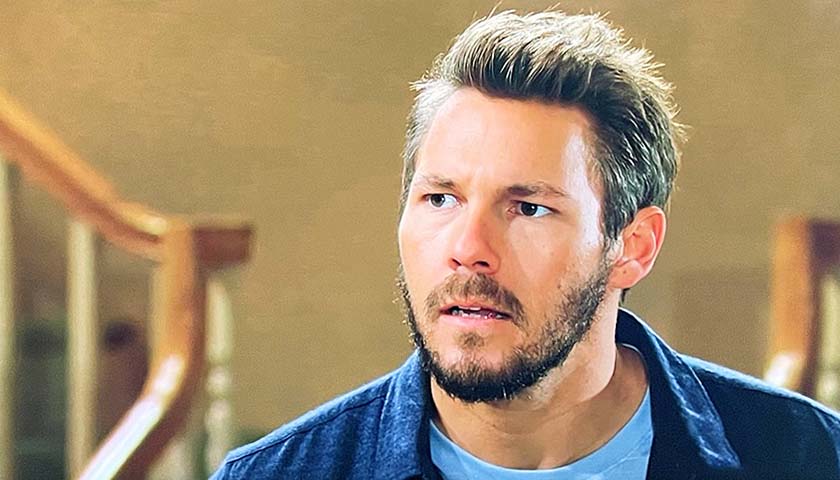 The Bold And The Beautiful (B&B) scoop for the week of October 24 reveals Liam Spencer (Scott Clifton) will spy on his wife, Thomas Forrester (Matthew Atkinson) and Douglas Forrester (Henry Joseph Samiri).

B&B spoilers tease that early in the week, Ridge Forrester (Thorsten Kaye) will make it crystal clear to Brooke their marriage is over. So, is Ridge going to jump the gun and ask Taylor to be his wife, even though he’s still technically married?

Speaking of Taylor, she’ll tell Ridge she’s purchased Wyatt’s beach house and will suggest they live there together, like they used to. But will he tell her it’s too soon? After all, he just left Brooke. Or will he be touched by Taylor’s gesture?

Meanwhile, Brooke will encounter a triumphant Steffy, who will rub salt into her broken heart. She’ll tell her stepmother her time with Ridge is done – her family has won the war. But Steffy may begin to have her doubts, when Brooke tells her the battle has just begun. And she’ll also warn Steffy that Thomas is obsessing about Hope Spencer (Annika Noelle) again.

Then Brooke will interrupt Hope and Thomas while he’s telling her how he feels about her. Thomas will leave and head to Steffy’s office to complain about Brooke. “I just don’t want Brooke interfering in my relationship with Hope,” Thomas tells his sister in the B&B weekly preview. “Relationship?” Steffy will ask. And Brooke will ask her daughter what’s going on between her and Thomas.

Bold And The Beautiful Scoop – Brooke Expresses Concern To Liam

Finally, Brooke will express her concerns about Hope and Thomas to Liam. She’ll say she’s worried they’re getting too close. “I’ve got eyes on him,” Liam will tell her. “I’m not just going to let him move in on my wife.”

So, Liam will head to the Forrester estate and he’ll encounter Douglas. He’ll ask him if he’s content, living there with Thomas. Then later, Liam will listen in on Hope, Thomas and Douglas talking. And what he hears may make him even more worried about his wife’s relationship with Thomas.  However, will Liam’s paranoia ultimately lead him to cheat on his wife yet again?

Since 2018, Brooke is still upset that FC shelved HFTF & Thomas/Zende are the line's main designers. She is angry that Hope has professional work. I don't know what relationship Thomas is talking about. Hope seems confused about her feelings & Liam is a jerk#BoldandBeautiful pic.twitter.com/WK7WPS8NWW