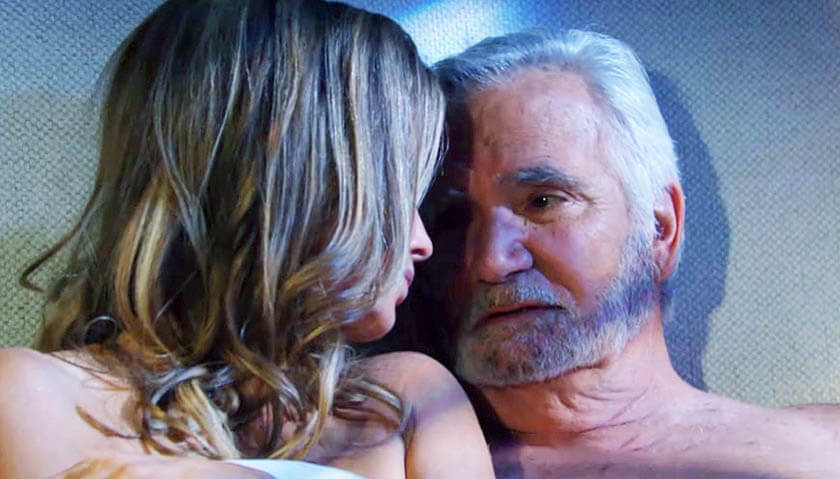 The Bold And The Beautiful (B&B) scoop for the week of June 6 reveals Eric Forrester’s (John McCook) guilty conscience will get the better of him.

B&B spoilers tease Li will head to the prison where Sheila’s currently incarcerated. She’ll face off with the murderer about shooting Finn (Tanner Novlan) and Steffy Forrester (Jacqueline MacInnes Wood). But as she’s blasting Sheila, Li will make a blunder, which will lead Sheila to guess that Finn is still alive.

Meanwhile, Ridge has been waffling between Brooke Forrester (Katherine Kelly Lang) and Taylor Hayes (Krista Allen) for months now. And he’ll finally come to a decision after a surprise visit from his wife. Brooke will show up in his bedroom wearing a long coat. And when she opens it up, it’ll reveal some skimpy underclothes. Maybe she’ll wear something from her old Brooke’s Bedroom line.

Bold And The Beautiful Poll: Who Should Eric Be With – Quinn Or Donna? Vote in our poll! #BoldandBeautiful #BoldandtheBeautiful #Deric #Queric

Regardless, Ridge will be tickled pink and he’ll tell her he wants to reunite. However, he’ll have one condition – she is to have no further contact with Deacon Sharpe (Sean Kanan). Of course, this won’t go over well at all with Deacon and Hope Spencer (Annika Noelle), when Brooke tells them later in the week.

At Forrester Creations, Carter will tell Quinn he can’t stop thinking about what might have been. But Quinn will remind him that she’s married. “My commitment is to Eric,” she says in the B&B weekly preview. “I can’t hurt him again.” So, Carter will turn to Paris Buckingham (Diamond White). B&B spoilers show he’ll kiss her. And Grace Buckingham (Cassandra Creech) will lose it.

As for Quinn, she will return home to Eric and talk about how much she appreciates his dedication to her and to their marriage. “My wonderful, loyal husband,” Quinn will say to Eric as she touches his face lovingly.

Finally, Eric will feel so guilty that he’ll have a serious talk with Donna. “We can’t keep doing this,” he’ll tell her when they’re in bed together. “This affair has to end.” But is Eric going to dump Donna, or will she talk him out of it?

Will Donna and Eric's affair end? 💔 Tune in to find out! #BoldandBeautiful is new this week on @CBS. Watch the latest episodes on @paramountplus! pic.twitter.com/KA1ulY74M5