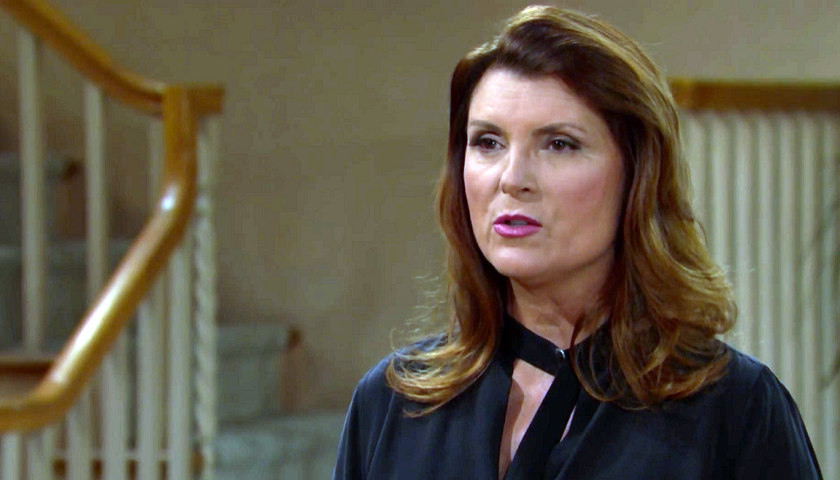 The Bold And The Beautiful (B&B) scoop reveals villain Sheila Carter (Kimberlin Brown) may be making a surprise return to the sudser.

The actress posted a tease on her Instagram account on Friday, showing a vehicle pass to CBS Studio Television City’s Stage 31. Specifically, she was visiting the B&B set.

“I had a wonderful time yesterday @cbstv @boldandbeautifulcbs,” Brown posted, setting off a barrage of speculation from fans.

“Maybe a reason for me to start watching B&B again after so many years?” one fan commented. “Wow then I’ll need an update on who is who on the show nowadays.”

Longtime viewers know Sheila was bad to the bone. She first appeared on the B&B in the early 1990s, a crossover character from sister soap Young And The Restless (Y&R). Eric Forrester (John McCook) fell in love with her and they got married. But she ended up holding James Warwick (Ian Buchanan) hostage, the Forrester family at gunpoint and shot and killed Taylor Hayes (Hunter Tylo).

“I hope you are coming back as Sheila!” another fan said. “Now that Eric and Quinn are on the outs!” As viewers know, Eric and Quinn Forrester (Rena Sofer) are experiencing intimacy problems in their marriage.

Bold And The Beautiful Scoop – Could Sheila Carter Be Dr. Finnegan’s Mother?

On Friday’s B&B, Quinn and Carter Walton (Lawrence Saint Victor) fell into each other’s arms and made love. The last time Sheila was in town in 2018 she tried, unsuccessfully, to break up Eric and Quinn. However, the villain may have better luck this time around.

Other viewers are hoping she’ll reveal herself as Dr. Finnegan’s (Tanner Novlan) mom. Nothing is known about Steffy Forrester’s (Jacqueline MacInnes Wood) fiancé, including his background and family members. Some fans have speculated about his mother, and many thinking it could be Quinn. However, others have also pointed out Finn seems too good to be true and could end up being the spawn of Sheila.

But was Brown’s Instagram post a hint that Sheila will be returning? Keep reading The Soap Scoop for more Bold And The Beautiful spoilers and news. And make sure you join our free Facebook Group.