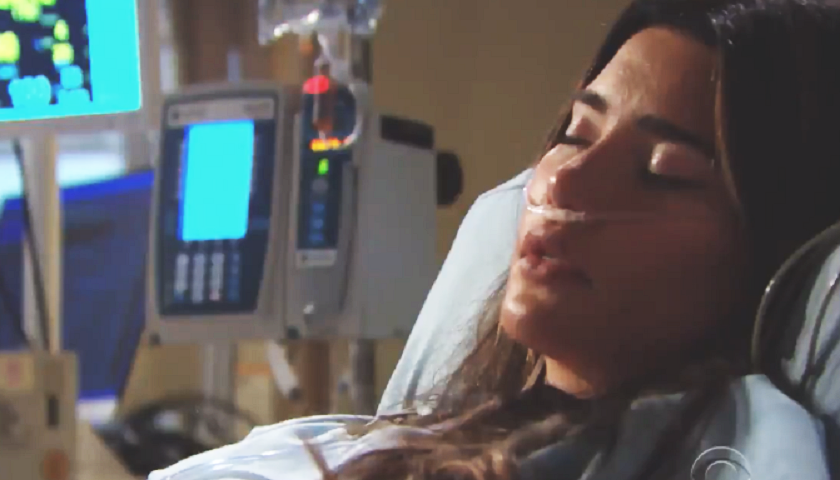 The Bold And The Beautiful (B&B) scoop for Friday, July 24 reveals Steffy Forrester (Jacqueline MacInnes Wood) is unconscious in the hospital.

Also, Bill Spencer (Don Diamont) will feel incredibly guilty as he calls Ridge Forrester (Thorsten Kaye) to relay the news about his daughter. And the tables will turn quickly on Sally Spectra (Courtney Hope) as her seduction of Wyatt Spencer (Darin Brooks) takes a sour turn.

“He will sleep with me,” Sally replied. “I really don’t think it’ll be hard to convince him to grant a dying woman her final wish.” Sally assumes she can continue to play on Wyatt’s sympathies, all the way into his bed. But when he sees the message from Flo on Sally’s leg, written in sharpie, Wyatt will finally be on to her and what she’s up to. He’ll quickly turn on her and demand to know where his girlfriend is.

A stunned Sally will deny having anything to do with Flo. Lying has gotten her this far, so she figures she may as well continue. And a desperate Wyatt will begin searching for his high school sweetheart. Will it take him long to figure out she’s being held against her will in Sally’s apartment?

Meanwhile, Bill will sit with Steffy in her hospital room, begging her to wake up. He will feel incredibly apologetic and guilt-ridden. He obviously didn’t mean to hit Steffy and will beg for her forgiveness.

Then Bill will call Ridge, who will rush to the hospital with Brooke Forrester (Katherine Kelly Lang). Rumor has it, Steffy’s going to look pretty beat up and an emotional Ridge will fear for his daughter’s life. Bill will tell him he hit Steffy when she was riding on her motorcycle. And Ridge won’t mince words. He’ll blame his nemesis and vow revenge.

Coming up next week, Detective Sanchez (Jeremy Ray Valdez) will show up at the hospital to ask Bill about what happened on the road that day. Will he be charged with a crime, or will the detective determine it was just a terrible accident?